Through the campaign, the brand encourages the audience to choose ‘Food That Does Not Lie’ and tastefully declares that it is not just a health brand, but also a transparent and honest one 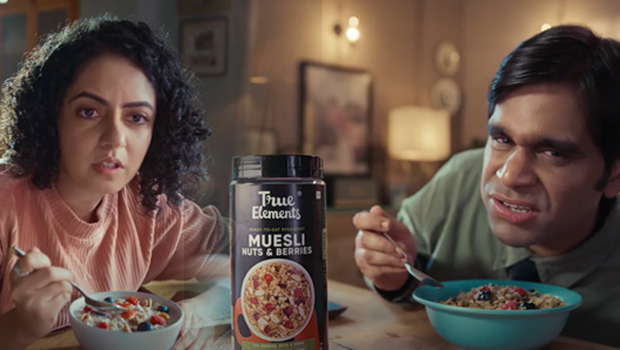 Clean label and 100% whole grain certified food brand, True Elements, has launched its first-ever campaign. The campaign encompasses four relatable films packed with a dash of humour and an earworm built on sonic and ASMR fundamentals.

It is well-known that most packaged food in the market contains unhealthy additives for a longer shelf-life or enhanced taste. Nevertheless, they present themselves as ‘being healthy’ by conveniently crafting half-baked claims.

This primarily drove True Elements’ insight that consumers are smart and know when a brand lies, which, in turn, needed to change. Building upon this, the campaign by True Elements showcases the brand drive the switch between telling lies to saying what is true.

It does so while highlighting its hero products - Clean Label Certified Rolled Oats, Nuts & Berries Muesli, and 7-in-1 Seeds Mix.

With its cinematic storytelling exploring relatable situations, the four films mindfully deviate from category cues around healthy food involving monotonous, left-brain messaging to engage a much wider audience in an endearing and unconditioned manner. Moreover, the films’ sonic signature - “Truing Truing, What You Doing?” further makes the message of ‘Food That Does Not Lie’ memorable.

Puru Gupta, CEO, Co-Founder and CEO of True Elements, said, “As we enter our next phase of growth, we need to reach households that are health-conscious but don’t understand the ‘clean label.’ This is our attempt to simplify the world for them and enter their kitchen with our range of breakfast and snacks. We are using a slightly different counter-category approach. Instead of rationally talking about ingredients or functional benefits, we are building salience around ‘not lying’ as a brand which more consumers can resonate with, hopefully.”

Ved Agarwal, Head of Marketing at True Elements, mentioned, “Through these four films, True Elements endeavours to encourage people to tell what’s true without being bitter but in

an innocent way. At the same time, it also aims to drive salience and association for the brand towards the same and it to be ‘deliciously unconditioned.’ The films will be amplified on video-first platforms such as YouTube, social media and OTT as well as UGC to reach 5 crore Indians to drive awareness for the brand.”

Govind Pandey, CEO, TBWA India, said, “People have wisened up to the well-packaged myth of healthy and tasty in one bundle, and are no longer swayed by empty claims. Our campaign "Truing Truing what you doing" raises a toast to those who choose clean, healthy and true, in the way they eat, say, and live. The characters, and situations are charming and witty and invite customers into the world of True Elements in a way that they cannot resist biting in to.”

Parixit Bhattacharya, Managing Partner, Creative at TBWA, said, “True Elements tells you what’s inside the pack. Even the bit about ‘No cranberry being born sweet’. This fact about the company became the foundation for all its communication.  And resulted in work that asks people ‘Truing Truing, what you doing?”

The two 30 second films focus on a common consumption moment like breakfast and place its characters (boss-employee and mother-daughter) in awkward situations where telling a lie is generally the norm. However, things take a truthful turn when they take a bite of True Elements, showcasing food that does not lie with characters that don’t lie post consumption.