This move was a part of the campaign to showcase that while everything can be spoofed, the brand’s offers for this Black Friday are as real as they get 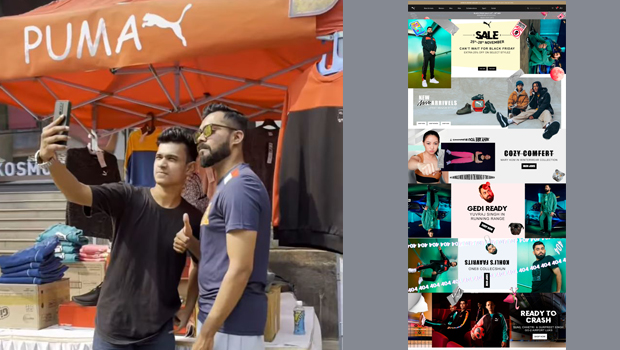 Sports brand Puma India recently launched its Black Friday sale campaign, which comprised of the it using doppelgangers of its brand ambassadors, and more quirky events.

Puma roped in doppelgangers of its key brand ambassadors, staged fictitious pop-ups with tampered branding outside select original stores, and even gave native website Puma.com a cyber-hacked appearance. This move was a part of the campaign to showcase that while everything can be spoofed, the offers for this Black Friday are as real as they get.

Kohli even took to Instagram to announce the brand’s sale event, that too in a quirky way.

Puma then revealed the Black Friday Sale and asked shoppers to get their hands on the brand’s premium products at great prices. A whimsical way to announce the sale, the event engaged with its consumers, piquing their interest and indulging them with offers.

As per the brand, the Black Friday event drove a frenzy of brand enthusiasts to its stores and digital platform, making the campaign a super success.

Shreya Sachdev, Head of Marketing at Puma India, said, “The Black Friday sale has emerged as a significant event on the Indian shopping calendar as it marks the beginning of the winter festive season. As a brand, Puma is constantly looking for opportunities to deeply engage with consumers and create quirky and ingenious experiences for them. Ergo, the Black Friday Sale event became a fantastic outpost. We are happy to not only create world class products but also invest in a one-of-a-kind campaign to connect with our consumers.”