The campaign celebrates love and nudges couples to commit to it, with Platinum Love Bands 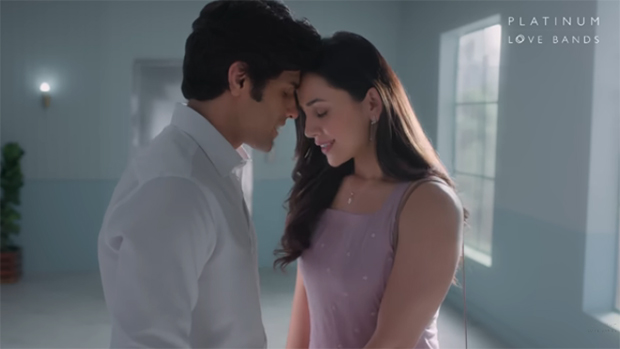 Platinum Guild International has launched the #CommitToLove campaign in the midst of the wedding season.

The bedrock of progressive relationships is a sense of shared responsibilities, dreams and having each other’s back. Platinum Days of Love celebrates this love and nudges couples to commit to it, with Platinum Love Bands.

Launched in the midst of the wedding season the campaign celebrates the myriad values of modern love.

The first film revolves around a couple about to meet the boy’s extended family for the first time. The girl being the older one is visibly nervous and apprehensive about his family accepting the 5-year age gap in their relationship. This is when he reassures her with a poignant line “The only number up for discussion today is our wedding date; the age gap doesn’t count; our love does”.

Having successfully reassured her and laid her biggest fear to rest, they stride forward on their new journey together.

The second film opens with a married couple getting ready for a celebratory dinner at home for their first anniversary. The wife voices her apprehension about her mother coming to live with them. It’s obviously something they haven’t discussed before and yet circumstances today have led them here. Her doubts are met with an endearing gesture from her husband- a keychain that he has ready for her mother with the words “Amma” engraved on it, his way of making their home – her mother’s too. The words “Don’t worry, your mom, my “Amma” will feel right at home. If it matters to you, it matters to me as well” strengthen the campaign’s core message of being in sync and in step with each other.

The campaign is aimed at building the brand saliency and driving consideration further in the important season for the jewellery category.

Sujala Martis, Consumer Marketing Director, PGI India, said, “Platinum love bands have always been about key milestones in the relationship journey, those are the occasions that we want to own as a brand. Given the affinity that platinum enjoys amongst the younger audiences – this campaign captures a slice of modern love and qualities that couples seek out today. #CommitToLove seemed like the apt nudge given the marriage season.”

Vishnu Srivastava, National Creative Director, 22Feet Tribal Worldwide, said, “One of the biggest considerations for this campaign is how we depict love and commitment in modern times. Because the idea of commitment evolves.  And while Platinum Love Bands are an eternal symbol of rare love, it’s also a brand that’s contemporary and young. So, we were glad to tell timeless tales with a modern lens.”

These digital films by Platinum Days of Love are a part of the larger #CommitToLove integrated campaign spanning TV, print, digital and social. The campaign is also supported by a content collaboration with Femina roping in actors Richa Chadha and Ali Fazal and Nikki Galrani and Aadhi  Pinisetty to drive deeper affinity.