The 14th season of the dating reality franchise is all set to air from November 12, Saturday-Sunday at 7 pm on MTV and Voot 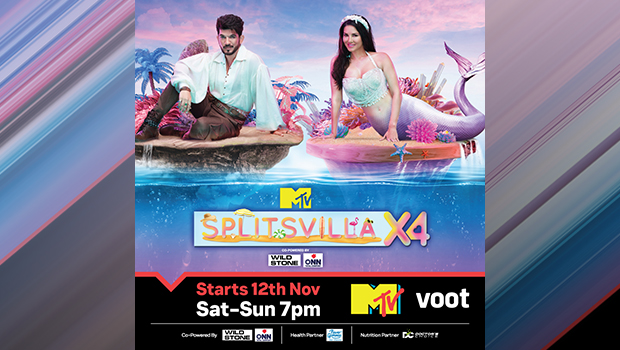 MTV is all set to present the new season of its marquee show ‘MTV Splitsvilla X4’.

MTV Splitsvilla X4 will present a mélange of modern-day dating and classic romance, where true love is hard-earned.

In its latest season, MTV Splitsvilla X4, co-powered by Wildstone Deos and Perfumes and ONN…Total Comfort, is all set to go on air from November 12, Saturday-Sunday at 7 pm on MTV and Voot.

With Sunny Leone and Arjun Bijlani as hosts, MTV Splitsvilla X4 features gorgeous girls and hunky dudes, Splitsvillains separated by distance and staying on the Isle of Venus and Isle of Mars, respectively.

The romantics will go through challenges to win a chance to meet their date on the other side. The prospective couples will be seen deepening their bonds over ‘Island Flings’ and getting to know each other better. Audiences can also look forward to love triangles and unanticipated wildcard entries, that are bound to keep everyone on their toes.

The competition will culminate in a nail-biting finish as the pairs battle it out to emerge as the winning couple.

Anshul Ailawadi, Head - Youth, Music and English Entertainment cluster, Viacom18, said, “MTV continues to spearhead youth entertainment in India with its repertoire of in-vogue content that evolves with its target audience. On the heels of successful franchises like MTV Roadies – Journey in South Africa and MTV Hustle 2.0, we’re set to launch the latest season of our tentpole show, MTV Splitsvilla X4. We’re sure the new season will be loved by all fans, old and new.”

With an amalgamation of passion, jealousy, lust, and intense drama, the show brings together Splitsvillains who are ready to take the plunge to find their true match.

Power Gummies has announced sponsorship for the latest season of SplitsvillaX4 as a health partner. The association with SplitsvillaX4 will enable Power Gummies to showcase its product range, including Gorgeous Hair & Nail Vitamins, as part of the ‘Hair Growth Matlab Power Gummies’ campaign in the show.