This combination of KFC’s signature Chicken Popcorn that’s crispy on the outside and juicy on the inside, along with slurpy Maggi noodles in one bowl, aims to be the delectable solution for your hunger pangs 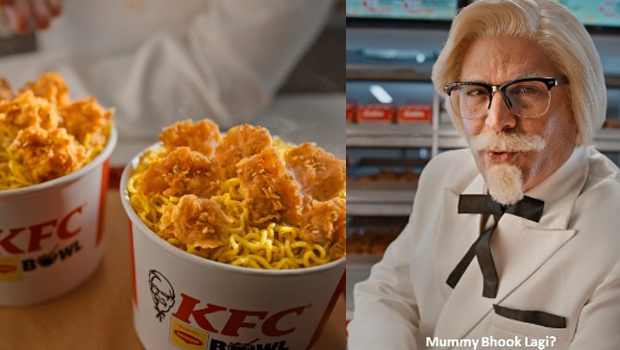 Unveiling the latest addition on its menu, KFC has released a campaign film with Colonel Sanders cooking up this masterpiece in the kitchen, while grooving to some beats.

KFC India had recently partnered with Nestle to delight fans with the KFC Popcorn Bowl Made with Maggi.

This combination of KFC’s signature Chicken Popcorn that’s crispy on the outside and juicy on the inside, along with slurpy Maggi noodles in one bowl, aims to be the delectable solution for your hunger pangs.

Moksh Chopra, General Manager, KFC India, said, “Both KFC and Maggi are iconic brands that are loved by their fans. It was a matter of time before these brands came together for an iconic partnership. Adding a dash of swagger to this delectable product offering is our Colonel in his swanky avatar, as he creates this masterpiece. The Colonel’s cool moves, along with the fun chemistry of the mother-daughter duo as they dig into their KFC Popcorn Bowl Made with Maggi, surely make for an entertaining watch.”

Ritu Sharda, Chief Creative Officer – North, Ogilvy, added, “KFC Popcorn Maggi is a quirky KFC twist to the classic Maggi. So, for our advertising too, we wanted to do a twist on the classic. We picked up the iconic Maggi line, ‘Mummy bhook lagi’ and flipped it around – where it’s the mummy this time who is having a hunger pang. Because with a product as irresistible as this, bacche kya, mummy ko bhi bhook lag jayegi!”

The film opens with Colonel Sanders in the KFC Kitchen rolling up his sleeves as he readies himself to create something new. In a surprising move, he picks up a Maggi cake, breaks it into two and adds the iconic magic masala to it, in a very Salt Bae like move, all the while grooving to a peppy tune.

He serves his masterpiece to the eagerly waiting mother-daughter duo, while cheekily asking the mother “Mummy, Bhook Lagi?”. They dig into this tasty goodness, and before the daughter gets a chance, the mother swoops in and takes a bite from her bowl, ending the film on a moment of laughter between the two.