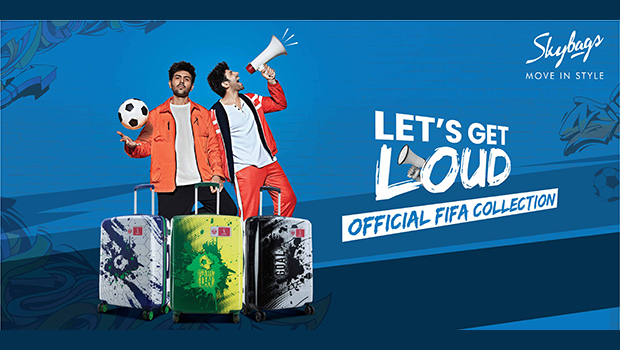 Skybags has launched an official FIFA licensed luggage range and to promote the same it has roped in actor Kartik Aaryan as its brand ambassador.

Football has always been immensely popular in India, and with the advent of the FIFA World Cup, the craze is bigger. Leveraging this World Cup fever, Skybags’ bespoke FIFA licenced range includes three designs that are excellent travel accessories for this season.

This exclusive FIFA collection flaunts the metallic plate with FIFA world cup Qatar logo which makes for an ideal collector’s edition. The first design, “Game On” is inspired by Brazil; the country of Football. The other 2 designs, “Goal” and “Treble” connote an unbiased design but complements the madness of the world cup season.

Aaryan features in its new campaign called ‘Let’s Get Loud’. The campaign captures the aesthetics of the luggage range and the vibe of the FIFA World Cup season.

Keeping in mind Gen Z travellers’ aspirations for individuality and style, the campaign features Aaryan at his expressive best with the bold, colourful, World Cup-themed designs of the FIFA licenced bags.

With Aaryan urging youngsters to ‘Get Loud’, this campaign taps into the desires of an increasing number of young travellers and football fans who want to showcase their authentic selves through their individual style.

Praful Gupta, Vice-President, Marketing, VIP Industries, said, “Staying true to our philosophy of ‘Move in Style’, we are delighted to introduce the first ever FIFA licensed range in the country with Kartik Aaryan and the Let’s Get Loud campaign. Both the campaign and the collection are reflective of the joy, excitement and vibe of the upcoming football season. To revel in the upcoming World Cup mania, we aim to link very closely with our target millennial and Gen Z audiences who always choose to exhibit their unique style through travel accessories. We have endeavoured to reach out to the fans of the game who are on a quest to find something truly exclusive and exciting. Through this campaign, we are geared to cater precisely to the requisites of this segment.”