Hindware partners with Grapes for new leg of ‘Build a toilet, build her future’ campaign

This year, the brand has taken the digital route to amplify the message 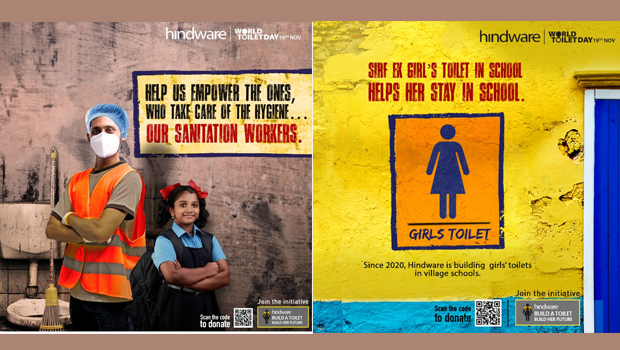 After receiving a good response for its campaign, ‘Build a toilet, build her future,’ the brand this year has embraced a digital media route to make people aware of the cause.

To drive the amplification of the campaign, Hindware has joined hands with Grapes.

Grapes decided to take the brand’s endeavour of ‘Build a toilet, build her future,’ to the next level. Hence, by seeking the digital marketing prowess of the agency, the visibility of the campaign was escalated across the social media platforms.

The entire campaign was curated with the aim to drive awareness around the serious issue of how a missing toilet facility could cost the girl child her right to education.

Supporting the brand in its cause, the agency came up with a thought-provoking idea, and as part of the creative they launched ‘Girl Toilet Posters’ on social media, each creative highlighting a message on girls’ education.

It showcases the gravity of the situation with the huge number of girls being unable to pursue their dreams owing to the lack of toilets. The creatives talked about how due to the dearth of sanitation, and the inadequate facility of girls' toilets in rural areas deprives the basic right to girls which is the right to education.

Other than this, the campaign intended to celebrate the ones who take care of the hygiene of girls in village schools by ensuring proper sanitation for them. Sanitation workers deserve a round of applause for their contribution and the brand feels the honour to have them in their journey towards building the future for girls. The agency took care of the entire social media strategy to reach out to the maximum number of audiences.

In 2020 on World Toilet Day, Hindware began its mission to send girls back to school, by helping build toilets in schools. Carrying forward the same initiative, for the third consecutive year, Hindware is determined to make sure girls don’t miss school again.

Grapes coming with the expertise of elevating the digital presence of the brands provided the gateway for Hindware to engage with the millennials who are highly active on social media.

Shradha Agarwal, Co-founder and CEO of Grapes, said, “Today millennials and Gen Z want to support a noble cause, but it becomes extremely difficult for them to identify the same in this over cluttered market. With 10,000 ads being exposed to them on digital every day, we had to ensure, our creatives should firstly be eye catching to attract this low attention span and secondly hit hard for them to understand the importance of the same. Hindware Girl Toilet Posters, justifies both the aspects properly."