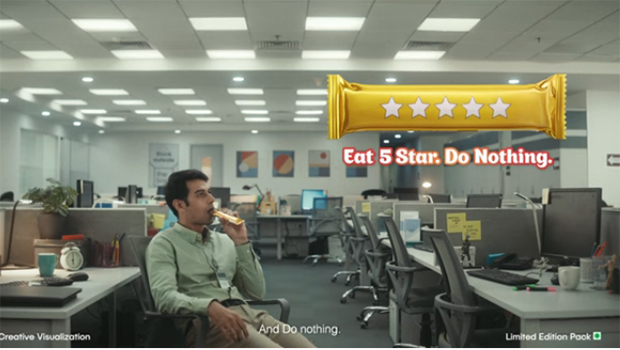 As part of the brand’s famous tagline ‘Do Nothing’, while other brands spend a fortune on deploying ads and in-app banners during the festive season, Cadbury 5 Star has reduced its budget to zero, and has declared that it can now ‘Do nothing’ to advertise.

That’s because the brand has simplified its logo into a graphic of five stars. Now every time any app asks for rating, the five blank stars on the app screen will resemble the new 5 Star logo, which means every app will end up advertising for the product without even intending to.

As a result, the brand is now visible across apps without the need to spend or do anything.

Conceptualised by Ogilvy, the #5StarsEverywhere campaign cuts through the noise of regular, high-budgeted promotional activities by deftly playing on what the brand does best – innovate.

Ratings have become an integral part of all D2C services, from food and grocery delivery to audio books and online shopping. Executing yet another brave idea, Cadbury 5 Star jumped at this opportunity and made itself synonymous to ratings across the board, essentially hijacking every app platform and smartly turning it around to be an ad for the chocolate.

With their new logo now present all over the internet, the brand now plans to hijack other mediums for free advertising over the coming weeks, by leveraging this approach.

Nitin Saini, Vice-President - Marketing, Mondelez India, said, “With every subsequent Cadbury 5 Star campaign, we have strived to do something out of the box while shining a spotlight on the ‘Do Nothing’ proposition. As a youth centric brand, all our recent efforts were aimed to resonate with the current generation – from NothingCoin, to our Valentine’s Day alibi campaign ‘My Cousin’s Wedding’ campaign. Now with #5StarsEverywhere, the goal is to get consumers to engage with the brand in the most inventive way possible. By simply tweaking our logo, the brand has created waves by investing next to nothing on advertising and still gaining maximum eyeballs across almost every app. Steering away from the quintessential way of promotions, Cadbury 5 Star adds a fresh perspective by relaxing and leveraging the five-star review on the apps to spread the sweet message – Do Nothing.”

Sukesh Nayak, Chief Creative Officer, Ogilvy India, said, “Cadbury 5 Star believes in the philosophy of ‘Doing Nothing’. To solidify this idea in young minds, we conceptualised a smart hack with #5StarEverywhere. This is a disruptive, app takeover idea which maximises partnerships by ensuring that 5 Star’s brand logo integration happens effortlessly across apps which have a rating mechanism. In the festive season when brands bombard consumers with thousands of branded ads, we cleverly re-designed the 5 Star wrapper to mimic the ‘ratings’ section which are present across most apps and subliminally turned them into ads for 5 Star.

So now anyone who sees an app rating page will think of Cadbury 5 Star. Yes, you will see a 5 Star literally everywhere. The list goes across platforms, service categories, languages, and countries. What adds to the fun, thanks to our ingenious idea, is that the brand will achieve to be literally everywhere and be part of fun conversations by doing nothing beyond the regular media budget.”