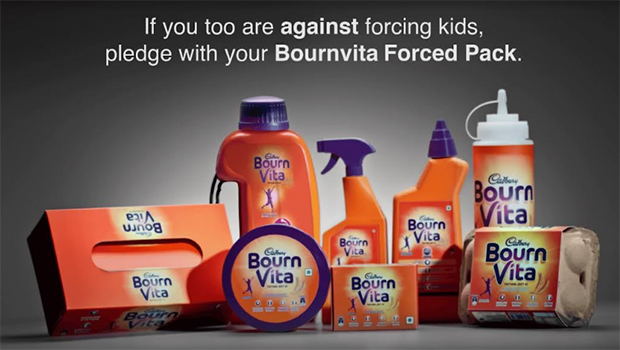 Timed around Children’s Day, Cadbury’s Bournvita recently released the campaign #FaithNotForce. As part of the campaign, the brand has released a video and amplified the campaign message through content, social media engagement and influencers.

The print leg of the campaign has garnered special attention from the advertising and marketing industry.

The campaign has fetched a mixed reaction from the A&M industry commentators. A few have called it ‘forced’, while others are praising the messaging and its execution.

Karthik Srinivasan, a Communication Strategy Consultant, who also has a huge social media following, called out the campaign as ‘forced’ and made for ‘awards’.

He wrote, “Ogilvy and Bournvita get the campaign name very right - "forced" packs, for an adequately "forced" idea. This one screams 'awards' right off the hook. It's a surprise Cadbury flagged this off.”

Samir Datar, Chief Strategy Officer at Crayon Advertising, questioned Bournvita’s brand purpose in his LinkedIn post, “This is an example of why I have issues with “purpose”. I have always admired Bournvita as a brand. When my kids were growing up, they loved Bournvita over every other health drink. So why this? Maybe a decade back this concept would have been relevant. But the TG that the brand addresses, there might be a few random cases where the kids are forced into choosing something they don’t want to.”

Amrita Kapoor Suri, Head of Marketing, Fliplearn, shared two print ads by Bournvita and how its positioning has changed over the years.

While praising the campaign, Shubho Sengupta, Director, Media and Creative, MyGov India, appreciated the usage of print medium by the brand.

While many A&M experts didn’t like the messaging and the execution of the campaign, there were also others who appreciated it for the idea.

Srabani Sen, Lead, Communications, Scripbox, wrote on LinkedIn, “When you want to send a strong message, you need to make a strong move. What a brilliant campaign by Cadbury Bournvita.”

In a statement, Ogilvy India, the creator of the campaign, said, “The #FaithNotForce movement aims to enlighten parents to take notice of their children’s true talent instead of forcing them into preset career moulds.”

In the meanwhile, Nikhil Narayan, known for making comments and sharing views on branding, advertising and marketing, asked people to pick sides and not be diplomatic. He wrote, “I saw the same people praising the latest piece from Bournvita under a post from the agency that made it and supporting another post by an influencer that is trashing the idea. Pick a side, folks. You know who you are.”

As part of the campaign, the brand transformed the Bournvita jar, found in every household, and forced it to become something they weren’t destined to be - a toilet cleaner jar, an egg box, tissue paper box, a glass cleaner bottle, a ketchup bottle, a soap box, a cooking oil bottle. These jars contain Bournvita powder inside them but don’t look like the Bournvita jar they were meant to be.

Ogilvy said that the intent is to shock consumers when they reach out for the Bournvita jar at shopping aisles and its direct-to-consumer website and notice these strange-looking packs, to help them draw a parallel to situations when children are also forced to follow a prefixed path that may work for others but may not be true to the child’s individual potential.

The Bournvita Forced Packs are available at select Star Bazaar outlets as well as online. By bringing these jars home and sharing their pledge, parents can show that they too are against forcing kids and they stand for showing #FaithNotForce.