The show has witnessed a 41% and 40% increase in viewership on TV and OTT, respectively. On Colors digital, with a three billion reach, the show has the largest share of voice amongst Hindi General Entertainment shows, said the channel 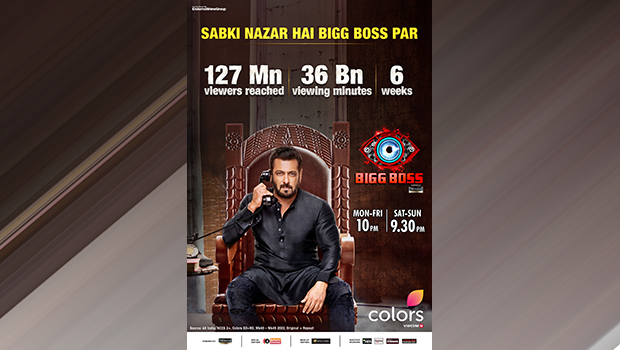 Within six weeks of launch, Bigg Boss 16 has reached out to over 127 million viewers with over 36 billion viewing minutes and a 41% increase in viewership on Colors (Source: All India, NCCS 2+, Colors SD+HD, Year 2022 Wk40 – WK45, Original + Repeat). The reality show has garnered 600 million views on Voot with over 40% growth in consumption on Voot, said Viacom18.

For this season, Colors launched a 360-degree campaign across platforms to establish the theme of the season, ‘Game badlega kyunki ab Bigg Boss khud khelega’. From giving fans for the first time a chance to interact with the contestants to unveiling the house with a digital creator, to launching the Bigg Boss Twitter emoji, the show generated 20 million conversations and multiple organic trends.

Colors further said that the ongoing season earned a reach of 3 billion along with 1 billion views and 97% of the share of voice in the GEC sector, the highest among the shows in the GEC space on social media. This season has also engaged with over 1 million Voot users through interactivities such as Boss Quiz, Video Vichaar amongst others.

Nina Elavia Jaipuria, Head, Hindi Mass Entertainment and Kids TV Network, Viacom18, said, “With daily social media trends, high audience engagement, and the no.1 spot, Bigg Boss has yet again established itself as not just a cult show, but an emotion that the nationwide audience celebrates. It’s a platform that continues to provide advertisers with innovative ways to engage with the viewers and we are thankful for their support of the show. With weeks of drama yet to unravel and tasks to be performed, we promise to deliver to our audience unparalleled entertainment and look forward to their continued love.

Manisha Sharma, Chief Content Officer, Hindi Mass Entertainment, Viacom18, added, “15 years long association of Bigg Boss with the audience is in itself a testament to its popularity. We truly believe that the innovative theme, the exciting line-up of celebrity housemates, and Bigg Boss’s ultimate gameplay have led to the success of the 16th edition of Bigg Boss. With more twists and turns in store, we hope to continue to surpass viewers' expectations with this season.”

This edition of Bigg Boss is powered by TRESemmé, has Ching’s Schezwan Chutney on board as its Special Partner, MyGlamm as its Make-up Partner, Garnier Men, Hershey’s Kisses, and Danube Properties as the associate sponsors.