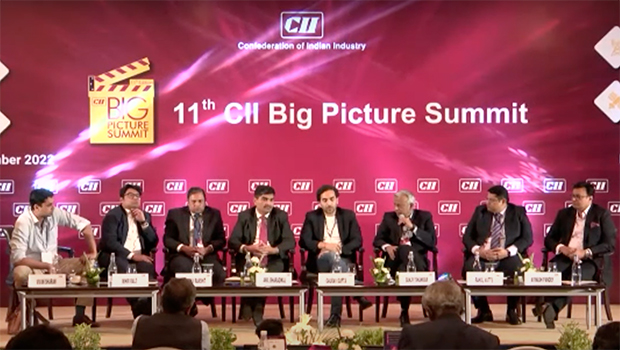 Speaking at a panel discussion on ‘The Future Of Indian M&E: Technology, Content Creation and Regulation and Its Impact’ at the CCI Big Picture Summit 2022, Sanjiv Shankar, Joint Secretary, Ministry of Information and Broadcasting, said that the media and entertainment sector has been disrupted by a number of phenomena involving new technologies, converged delivery networks, changing user patterns, bundled services, converged devices etc. that pose challenges to the governance of the sector.

“While there is a behavioural shift happening in the M&E industry, which includes the broadcasting sector as well, it is heartening to note that there is scope for coexistence despite the fact there are issues that are coming out of the emerging technologies,” he added.

He also went on to add that the convergence of entities, networks, business practices, etc. has thrown unique challenges on the regulatory front at all levels, primarily- the businesses, and the individual in society.

In Shankar’s view, the regulatory challenges at the entity level include ensuring a level playing field for all businesses whether small, big, new or old. “This level playing field business is a very important thing and is very difficult to handle as there are dominant players who are already present in the sector in which the emerging technologies are playing the role of a disruptor,” he stated.

In the midst of all these, the regulator and the Ministry face the twin challenge of supporting emerging technologies and providing a level playing field to the existing players in the sector simultaneously.

“Emerging technology has always played the role of a disruptor and the regulatory framework has to future-proof itself, but there cannot be any knee-jerk reactions. Also, as a government, we have a responsibility towards all stakeholders, so we cannot allow the level-playing field to be disturbed,” he added.

As per Anil Bharadwaj, Advisor, Telecom Regulatory Authority of India (TRAI), “There are competing interests, totally diametrically opposing views as one set of stakeholders are in favour of controlling everything, the other side emphasises on the pricing of their own offerings. We as a regulator have to balance that and that is what we have been trying to do when it comes to the NTO.”

Since there was a three-year gap between the NTO proposal and the rollout, the regulatory body has been facing issues regarding what should be regulated and what should not as it deals with it.

“TRAI has been doing everything possible to enable a positive, consultation-based, industry-friendly approach and we have had multiple meetings with all stakeholders,” he added.

Bharadwaj also went on to highlight that Smart TVs today account for 8 out of 10 households. “We have to see how much of our policies go towards Smart TVs and how much the Ministry look beyond content as content regulation is happening for OTTs,” he stated.

“If innovation is welcomed, how the technology of yesteryears has to be enabled, that remains a challenge as one cannot have a totally tied thing on one end and a total 100% freedom on the other and it is not an easy task,” he said.

Furthermore, he also went on to add that as of now, India has 40% untapped TV homes and thus the medium can actually expand in the country, provided the screens can actually reach those houses.

“In our next level, we will only look at buying all the imported equipment and it will not be India-centric, else the Indian Media and Entertainment Industry will remain a small subset of how the global media works,” he stated.

When the panel moderator, Vivan Sharan, Partner, Koan Advisory, raised the question of what a ‘level-playing field’ means or represents to the news broadcaster, Avinash Pandey, Chief Executive Officer, ABP News and President, The News Broadcasters & Digital Association (NBDA), said, “The biggest problem today is that there are enough regulations for us on what we can say or show on Television, but there are no such regulations on social media. Hence, the informed people who consume news through social media can still make an informed choice while it is freely disseminated without any checks and balances. It is a very serious threat to democracy, leave alone the media.”

He also went on to add that the level playing field the news broadcasters have been talking about is that the cost of reaching the consumer is so high, how can one expect the freedom of expression and the role of media to be relevant in the country?

Additionally, he also stated that the technology space is changing and that the medium itself has become the message. “There are telecom players who are curating content through AIs and Machine learning amongst others. In that context, why at all should we restrict the OTT players from delivering live news despite them being the licensed operators,” he said.

Replying to the moderator’s question on the rising cost of distribution in general across the entire industry, and how as a distributor he reconcile the different pressures in the business models, Rahul Vatts, Chief Regulatory Officer, Airtel, said “As a distributor, we clearly see a shift in the way the consumer is consuming content. There was a time when we had limited channels, then there are a variety of channels to today when the consumer has a huge choice available for OTT and for the consumer, there's a low-shifting cost attached to it.”

Furthermore, Vatts also went on to add that DTH still remains a sort of ‘personal choice versus family choice’, a ‘rural choice versus urban choice’. “For us, the DTH player is now coming into the rural and hinterland areas of the country because the cost is still a factor which is a determinant to the large sector of the society,” he added.

Commenting on the challenges faced by the telecom company on an industry level, Vatts stated that he feels stuck in the current situation as the cost of the company’s services is regulated, whereas creator platforms on the other side have the liberty of doing what they want.

Moreover, he also added that in order to stay in the competition and also in the market, the company only has the option to become hybrid and try to bundle boxes.

“We try to create opportunities for our subscribers to be able to watch both- DTH and OTT content through our Android box because after all, I have to go as per the customers’ choice,” he added.

Sharing his views as a player who deals in the content spectrum entirely, Gaurav Gupta, CEO, FutureWorks Media, said, “The barrier to entry in terms of creating content is on mobile phones and that’s what stops great content from being made. Skill development and centres of excellence should be created and these are the areas where we should focus more.”

Commenting on what a level-playing field means for the AVCG sector, Gupta stated that the AVCG sector can do the same as the country’s IT sector if they want to succeed in the global race for creating content, gaining subscribers, all in all, something which is creating a huge demand for AVCG services.

“It’s a great time for the Indian AVCG sector to get up and create new skills and develop human capital that we can actually grab this opportunity and similarly show and achieve a success as we have in IT,” he added.

Bringing out a not-so-much discussed point at the discussion with reference to government measures, Gupta highlighted that there are a lot of tax regulations like GST, which was instilled in place of supply of services tax, which is being applied to visual effects and exports.

“A film or contest which is coming to India to be processed for visual effects and then being exported is now coming under the purview of GST and the tax is being applied, which wasn't the case earlier,” he stated.

Upon being questioned as to how Viacom18 as a media company is not necessarily competing for ad dollars with television but with the entire digital market, Gourav Rakshit, COO, Viacom18 Digital Ventures, replied, “I think that through the course of this year we all have seen significant disruption not just in India but all over the world, in terms of the economic models around digital media and entertainment.”

“It was unprecedented to think Netflix would put advertising on its platform and I think people are realising that ‘On-demand Content’ is a far more expensive beast than potentially a linear broadcast stream because of its finite amount of content,” he added.

Furthermore, Rakshit also revealed that the consumption story is very strong both in terms of reach, time and attention. But it is the monetisation part that lags behind significantly in India.

“We are less than 1% of the US in monetisation. If you look at what consumers pay, if you look at CPMs, likes and all other things, we are still figuring it out and throughout the course of this year, there have been different pricing models and different distribution strategies which people have adopted. Thus, it's very much clear that our sector is still looking to find its feet and form a stable monetisation perspective.”

Commenting as to how sectoral disruptions impact content, Mihir Rale, Chief Regional Counsel, Disney Star, said, “I think speech and expression do have a very precious space when it comes to the Constitution and it should be included only into subsets of the public interest and not public interest in general as that essentially is a big disservice to the wisdom prevailed in the preferred right.”

“To say that economic intervention is not impacting content, I believe, is a complete fallacy. It is an absolute intrusion on content and it completely affects how content is created, disseminated and ultimately on the quality of content a consumer is able to receive,” he added.

Furthermore, he also went on to state that the biggest distinction between the traditional model and the new models in the modern world is that there is more incentive for creators to engage in a particular form of the model and for consumers, it happens by active choice.