The channel says that it has been fetching an average of 74.3K daily live concurrent users (weekdays, 9-10 PM) 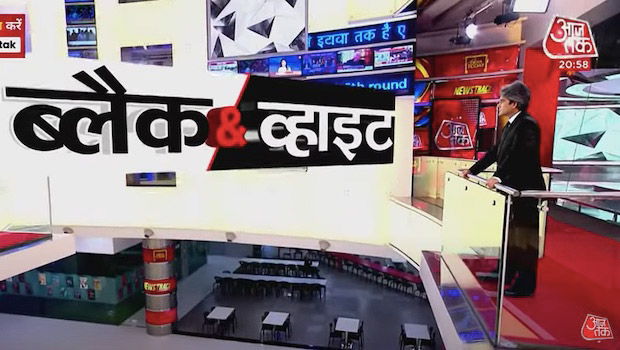 Ranking top in the 9 pm band ever since it started rolling, Sudhir Chaudhary's debut with Aaj Tak Black and White Show has been witnessing the highest concurrent views on YouTube, the channel said.

Black and White Show on Aaj Tak has undoubtedly been holding attention ever since it was started in July 2022. It has been breaking all records for past 2 months on the 9 pm prime time band on YouTube making Aaj Tak rank no.1 every day on the digital platform YouTube, leaving the competitors behind by a considerable margin.

“The show has successfully established a broad audience with its viewer connect. Sudhir Chaudhary’s show on Aaj Tak caters to the audience's news requirement with every topic, making it Black-and-White, logical, retaining the true essence of the story, and specially curated for a deeper insight,” said the channel.

Aaj Tak’s Black and White show with Sudhir Chaudhary has covered sensitive updates around various topics, from the in-depth analysis of national and international news. Uncovering well-researched data and underlying facts, Chaudhary also presented the Hijab Row with deep research. Black and White's show also covered the Russian-Ukraine war, enhancing the audience's insights into the topics and providing a window to think through facts and data.

Followed by crucial topics of national interest like the NIA PFI Issue, Congress president elections, RSS Story to controversy surrounding film AdiPurush including an exclusive interview of director and writer.

With their social campaign of ‘Mera Swabhimaan’ highlighting the lives of blue-collared employees and the issues they face, the host aims to initiate a revolution that talks about the basic human code of conduct and establish a place of pride in society for the hardworking daily wage earners.

Sudhir Chaudhary's Black and White has successfully emerged as one of the most promising prime-time shows. Ruling the prime time with the most concurrent live views on YouTube and continuing the dominance in news space.