The channel took on multiple initiatives such as ‘Music on Wheels’ to ‘Musical Stairs’; ‘Sa Re Ga Ma Pa’ Instagram filter to a radio station take-over as part of the campaign 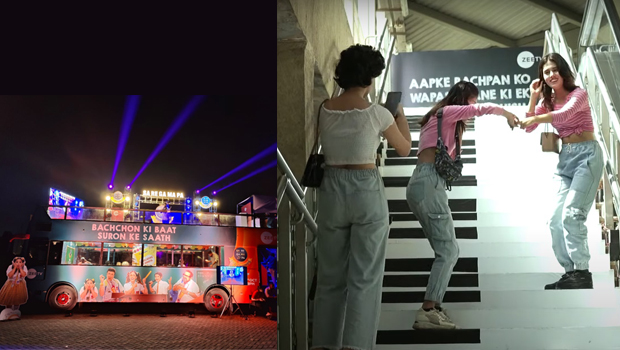 Zee TV is launching the ninth season of its singing reality show ‘Sa Re Ga Ma Pa Li’l Champs’ on October 15, 2022 with a fresh panel of judges including Shankar Mahadevan, Anu Malik and Neeti Mohan with Bharti Singh as the host.

In the run-up to the launch of the season, the channel launched an innovative marketing campaign that centres around the audience’s love for music and aims to reconnect them with their inner child.

To bring alive the campaign, Zee TV is giving consumers and aspiring singers a chance to have some fun while experiencing the show’s format through a ‘Music on Wheels’ initiative that has seen thousands of people participating and showcasing their singing talent on a glitzy bus traversing through the streets of Mumbai on October 9 and 10 in Bandra and Juhu respectively. While a lot of youngsters and homemakers participated in the initiative in Mumbai, a member of Mumbai’s police force who couldn’t stop himself from singing also hopped onto the bus and gave a spectacular performance to the audience, leaving everyone amazed by the talent that our special forces have.

In fact, Zee TV’s social media post of the policeman went viral with people raving about his performance, so much so that the official Mumbai Police Twitter page also retweeted the post. The Music on Wheels bus is now set to move to the Red Fort in Delhi to give aspirants and loyalists in the city a chance to showcase their talent on October 14. The initiative has made waves on social media with influencer Curly Tales covering it on her social media handle.

By way of an innovative collaboration with Radio City, Zee TV’s Li’l Champs took over Radio City to give all listeners across Mumbai and Delhi, traffic updates and time checks in their own cute andaaz through the day for two consecutive days leading into the show’s premiere.

The young singing stars even hosted a segment called ‘Bachagiri’ where they answered calls and responded to problems of listeners, offering amusing quick-fixes and dedicated relevant songs for every situation. What’s more, the talented kids also remixed the Radio City jingle in their own unique andaaz, leaving an unmistakable Li’l Champs stamp on it.

With the social media fever raging on, Zee TV is also reconnecting netizens with their inner child through an enthralling augmented reality visual effect. They’ve released an engaging gaming filter on Instagram that has got viewers excited to take on the #LilChampsChallenge, where users play a fun game called ‘Sing a Song’ through the filter and sing a song based on the note that is selected from ‘Sa Re Ga Ma and Pa.’

In an effort to remind everyone of their childhood days and spread some more cheer and joy, Zee TV collaborated with an OOH partner and put up piano keys as steps at the Airport Road Metro Station in Mumbai. When any person walks over the highlighted steps, different notes of Sa Re Ga Ma Pa start playing, adding a melodious touch to their daily commute.

Further, to encourage the Li’l Champs in achieving their dreams, world-famous cricketers like Dwayne Bravo and Shikhar Dhawan also sent in their wishes for Sa Re Ga Ma Pa Li’l Champs contestant Pragjyot Gundale, who is a budding singer as well as a national level cricketer, making him really emotional and upbeat about participating in the show.

Aparna Bhosle, Business Head- Zee TV, said, “Sa Re Ga Ma Pa has received a lot of love from viewers globally over the last three decades and this festive season, we are back with the ninth season of Sa Re Ga Ma Pa Li’l Champs. While the fresh talent of the show has already grabbed attention, we were keen to give our viewers a flavour of this season which is all about reconnecting with your inner child. Be it the 'Music on Wheels' initiative or the fun Sa Re Ga Ma Pa Instagram filter that makes you sing or the radio station take-over by our new talent, the idea was to create an immersive experience for our viewers and let them actively engage with the brand. We look forward to a great season."