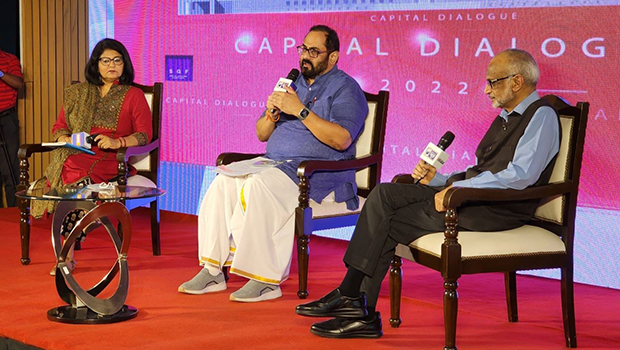 Capital Dialogue will take place every month from now on.

The first episode of ‘Capital Dialogue’ will air at 7 pm on Monday, October 10, on NewsX.

Chandrasekhar stated that India has taken the lead in the current digital economy during an engaging discussion with MD Nalapat and Priya Sahgal. “India is quickly approaching major success in the growth of its digital economy thanks to technical innovation. India has become a major participant in the digital economy due to the recent development in that industry. Prime Minister Narendra Modi has set a target for our digital sector, which today makes up 6%-8% of the entire economy, to attain a minimum of 20% of the total GDP by 2025-2026. Young entrepreneurs’ passion and commitment, in addition to government incentives and programmes, are essential in developing a strong digital economy,” he said.

The Minister also highlighted India’s progress toward digital development by stating, “In 2014, the entire electronic manufacturing in India was Rs 1 lakh crore, and by 2025–2026, we will reach Rs 26 lakh crore, which translates to 26 times increase in a decade. Additionally, the previous three years have seen 66% of the total FDI in electronics. The influx of manufacturing investment started after 2018. We left our stamp on the ecosystem from 2014 to 2018, gradually rebuilt the ecosystem, and sent out a message to the rest of the world that we have the skills and credentials necessary to create an electronic ecosystem.”

Successful first-generation business people and investors have a renewed feeling of self-assurance, he stated. Additionally, he also claimed that the introduction of 5G in India has had a big impact on how digital India is changing.

“As a business owner, I observed that every component of the 2G, 3G, and 4G networks was imported, including the screw or screwdriver, which was purchased from a French or European company. However, with the 5G network, India is announcing that all of its products, designs and intellectual property (IP) will be made domestically. This is a triumph for Indian technology,” he remarked.

Further in an open house discussion, economic analyst, advisor and author Pranjal Sharma stated, “When you look at root servers, they are all located outside of India. Our capacity to make the chips is beginning now, should’ve happened under Bajpai Ji so that the condition would’ve been better now, but we still have a problem. Covid and the Ukrainian war exposed the danger of excessive dependence on the external ecosystem. We saw that in pharmaceutical, and we’ve even seen that in the technology and telecom sector. How much does this concern influence how the government makes policies?”

Answering Sharma’s query, the Minister replied, “We’re a generation or two behind everyone else, but I don’t think we should be concerned about the realisation that things could have been done twenty years ago. For instance, the semi-conductor industry is a classic example of how, 25 to 30 years ago, when we had HCL Mohali, we allowed it to burn down and nobody bothered to look at it strategically again. Yes, we are a generation or two behind everyone else, but the Prime Minister sees this as an opportunity to skip the entire investment.”

He added, “If it weren’t for the fact that PM noticed this in 2014 on electronics and on digital, we would have been struggling through COVID at the time. Therefore, I believe that the best course of action is to collaborate with other democratic nations who share my views in key areas of technology trade.”

Speaking further about the issue of unemployment, the Minister said, “From 2017 to 2020 (pre-Covid), un-employment steadily came down to 5%. During the pandemic, there was a disruption in the economy and workforce. The whole global segment was deeply impacted by the pandemic due to the restriction on travel. The hospitality sector and the services linked to the hospitality industry, a huge employment creator, are now left with permanent scars due to Covid. These numbers are captured in the unemployment sector. Some nations have experienced a post-Covid recovery in the economy, but this recovery is not the same as it was before the disaster. Some areas have grown faster and some didn’t. These issues cannot be addressed quickly, but the sectors, like hospitality, are making a slow recovery.”

Meanwhile, Rajya Sabha MP Kartikeya Sharma asked the Minister of the skill development programme, he quoted, “The absence of data is the main issue that individuals in skill development programmes are dealing with as a result of the shift that the field is through as the PM focuses on the new education strategy incorporating skill development. It is essentially data-dark; we have data on the supply, but there is nothing to work with when it comes to consumption and the demand and supply gap. Do you not believe that the programmer may benefit from some form of data structure to discover the opportunities for individuals to express what competence is necessary when?”

The Minister stated, “As there is a large gap or intermediary between those who supply the skills, those who possess the skills, and those who require the skills, there is obviously a lot of shooting in the dark. On November 2022, we will launch a comprehensive platform for arts and skills development in India as an app and desktop software, enabling students to build and seek skill development. The software has a special feature in that it assesses each user individually and then makes recommendations for skill development based on those results. It will function as an online university.”

He shared that in the days to come, emphasis will be placed on the local economies in order to provide job opportunities. The skilling ecosystem has also been strengthened. The Minister emphasised that there would be unique skill development programmes for each region, according to the local possibilities and demands for that region, such as handicrafts, agriculture, non-agriculture, and migration opportunities both domestically and abroad.

“Every nation strives to be a global leader thanks to its riches; this is the primary tenet of At-Manirbharta. Prime Minister Narendra Modi foresaw the expansion of Atmanirbharta in the electronic and digital industries back in 2014, and as a consequence, the Indian economy was able to weather the global financial crisis quite well. India will have a significant impact on future global semiconductor value chains in terms of incentives and protection for semiconductor protection duties. Our objective will be to encourage value addition from India as the scale increases. Value addition is demonstrated through purchases of locally produced semiconductors, components, local manufacturing, and other activities,” Chandrasekhar said.