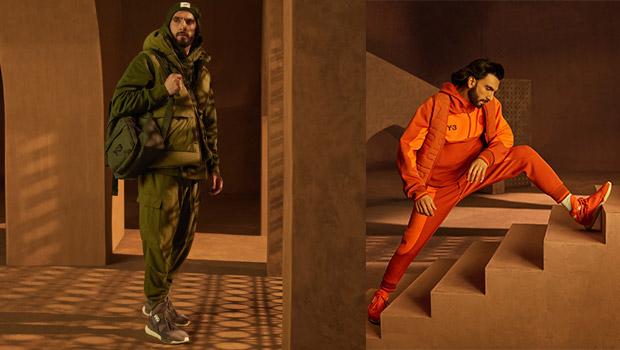 adidas and Yohji Yamamoto have partnered to bring its Fall/Winter 2022 collection as Y-3 continues its ongoing 20th anniversary celebrations. Building on the “20 Years: Re-Coded” thematic narrative and aiming at delivering more excitement, meaning and diversity through storytelling, the brand for its latest campaign Y-3 has roped in actor Ranveer Singh.

Yohji Yamamoto once explained that “With one eye on the past, I walk backwards into the Future”. Inspired by its brand history, Y-3 boldly reimagines its identity for the future. In addition to the Chapter 4 campaign, Y-3 challenges conventional collaboration in sport and culture by partnering with Singh for a set of celebratory visuals.

Singh’s multifaceted personality is founded on sturdy discipline and expressed with spirited vivaciousness. The collaboration harnesses his energy and rhythm to also shed light on the method to his madness.

An interplay of the actor’s eccentric suave and Y-3’s minimal boldness, the campaign is aimed at spotlighting Singh as the quintessential Indian face of Y-3. Set against a backdrop of futuristic India, dripping in mystique, the campaign explores the convergence of visually enticing elements from India’s regal architecture and historic landscape to add a touch of newness to Y-3’s classic codes.

An artistic tribute to the humble streetlights of India, the warm orange lighting underpins the subtle dynamism of expression. While the background score of classical Indian music with a hint of techno beats further elevates the exotic spectacle experience.

Shot by Rid Burman, with creative direction from Leo Burnett India, the visually dynamic campaign draws on Singh’s inimitable charm, exuberant energy, and multidimensional persona to offer a fresh interpretation of Y-3’s past, present, and future.

With a powerful choreography by Terrence Lewis, the campaign celebrates Singh as he artistically reinterprets and reimagines the very notion of sporting movement.

Speaking about the association, Singh said, “It is an incredible honour for me to be a part of Y-3’s iconic legacy. This collaboration challenges mainstream perception of sporting movement – it’s fluid. It feels great to be able to glimpse into the future and bring it to life with a metamorphic Indian touch.”