&pictures to present premiere of ‘RRR’

The premiere will take place on October 16, Sunday, 12 noon 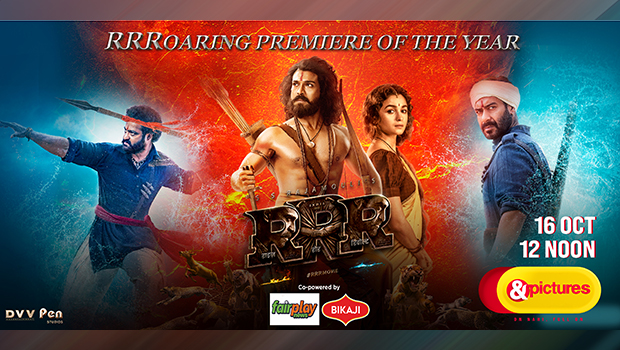 The premiere will take place on October 16, Sunday, 12 noon. Directed by SS Rajamouli, the film has everything you would imagine and more.

Adrenaline pumping action, masterstroke visuals, never seen before stunts, a fabulous cast and a storyline that will get you hooked - it is no surprise that RRR broke every record imaginable, becoming a massive success globally.

Here are some more reasons to tune into RRR on October 16:

3 Ram Charan’s powerful introduction scene is one that will go down in history, the team worked for 32 days to shoot this one scene. On this shot, director S.S. Rajamouli said, "Ram Charan’s intro was one of the scariest shots in RRR. It has as many as 1,000 people marching towards Ram Charan, ready to attack him. That shot was so high-voltage, I was scared during the shot. That adrenaline rush when 1,000 people gang up against one guy, is emoted with such a great effort. But, thank goodness, he completed the shot unscathed.”

4 The mind-blowing animation of RRR took over six months alone!

5 Director SS Rajamouli is famous for designing impactful and grandiose interval scene in most of his movies. Continuing this trend, RRR showcases one of the most epic and thrilling interval scenes in all of Indian cinema.

6 RRR is one of the most expensive Indian films to ever be made.

7 It took a total of 200 days for rehearsals, auditions, and screen tests before the actual shoot

Fueled with brilliant visuals and direction, RRR tells the tale of two illustrious revolutionaries Alluri Sitarama Raju (Charan) and Komaram Bheem (Rama Rao) and their journey away from home. Brought up with different schools of thoughts and one common goal, Ram and Bheem find their ways to each other and form an unbreakable bond of brotherhood.

It focuses on the unrecorded time of their life when both rebels choose to live in obscurity before waging war for their nation.