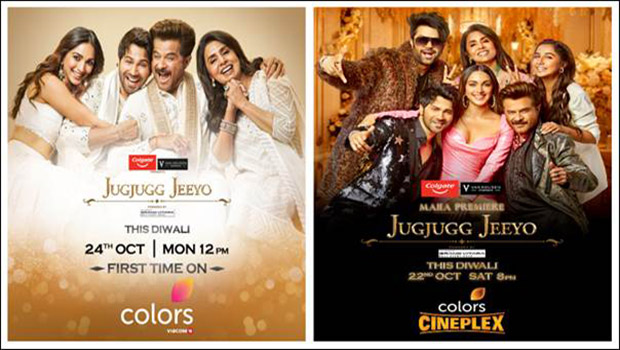 This Diwali, Colors is going to present the double dhamaka of entertainment with the television premiere of blockbuster movie ‘Jugjugg Jeeyo’ on Colors Cineplex and Colors.

Colors Cineplex is all set to present the premiere of ‘Jugjugg Jeeyo’ on October 22 at 8 pm. The film will also be aired on Colors on Monday, October 24 at 12 pm.

Nina Elavia Jaipuria, Head – Hindi Mass Entertainment and Kids TV Network, Viacom 18, said, “An out-and-out family entertainer, Jugjugg Jeeyo is one of the most successful movies of the year and it brings us immense pleasure to have its Television Premiere on Colors Cineplex and Colors. It’s our special Diwali offering of power-packed dose of entertainment for the viewers. We're thrilled to showcase a movie that rides on high-octane drama and comedy while capturing the cultural pulse of India."

Rohan Lavsi, Business Head - Hindi Movies Cluster, Viacom18, said, “After fortifying our presence in the movie space by showcasing acclaimed blockbusters, we are thrilled to present ‘Jugjugg Jeeyo’, a perfect family entertainer this Diwali. While the movie has broken numerous records and emerged as a massive blockbuster, we are confident of taking its success on television notches higher with its premiere. Premised on family drama and relationships, the film will strengthen our arsenal of content offerings and enhance the variety of our movie library. We hope that the viewers enjoy the World Television Premiere of one of the most loved blockbusters of the year."

Directed by Raj Mehta, ‘Jugjugg Jeeyo’ chronicles the marital issues of two couples from different generations while taking the viewers through a volley of emotions, hilarity, and drama.