The ad film showcases Aamir Khan as a son-in-law who decides to stay at his wife, Kiara Advani’s home post-marriage as her father is specially-abled 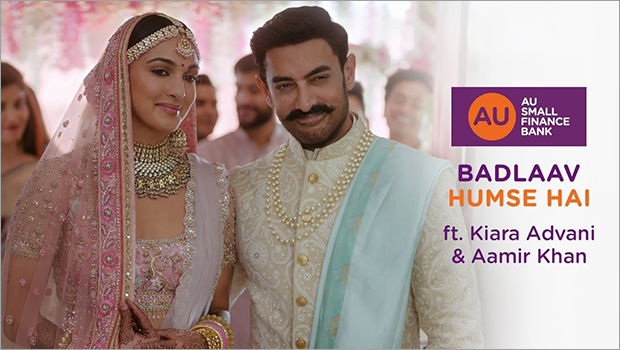 It was eventually removed by the company from all social media handles as #BoycottAUBank and #BoycottAamirKhan began trending on Twitter.

The ad, now retracted, started by showing the newly-wed couple Khan and Advani seated in the back seat of a car which is moving towards Advani’s home in the film since Khan decided to become a stay-at-home son-in-law since the female protagonist’s father is specially-abled.

The ad ran on a very progressive communication line of questioning, as to why one should stick to the age-old societal norms and expectations, followed by Khan questioning the practices prevalent in the banking industry so that one can get the best services and it culminated with the name of the campaign ‘Badlav Humse Hai’.

It is also to be noted here that both Khan and Advani are the brand ambassadors of AU Small Finance Bank.

Post the airing of the new ad film, AU Bank was strongly criticized by some for showcasing a progressive move that doesn’t concern banking as a category, post which the banking company finally decided to take the ad down.

Vivek Ranjan Agnihotri, a filmmaker and author, took to Twitter to express his opinion on the new ad and questioned, “Since when Banks have become responsible for changing social and religious traditions?”

Furthermore, he also highlighted that in his opinion, a better approach for AU Bank would have been to do activism by making a change in the corrupt banking system.

Commenting on Agnihotri’s tweet, Twitteratis began to bash Khan as well as Sanjay Agarwal for wanting to see a ‘Badlav’ in the ‘Hindu culture’ per se and urged fellow netizens to boycott the banking company and Khan.

AU Bank next time tell your ad agency to make an ad on halala and tell Aamir Khan to wear burkha and hijaab. Lets see then how you survive in India coz you are gonna face the wrath of the other community.#BoycottAUBankIndia #BoycottAUBank #boycottausmallfinancebank https://t.co/2lQwQcYFSm

"Boycott their product also boycott au small finance bank.” Very disappointed to note that you have taken an #antinational like #amirkhan as your brand ambassador .We will have no choice but to #boycottausmallfinancebank #AamirKhan_Insults_HinduDharma pic.twitter.com/lcLNQbsSiN

#BoycottAUBank #boycottausmallfinancebank @aubankindia for hurting #SanatanDharma sentiments. It’s ill minded sick people who vouch for such disgraceful Advertising of hurting our sentiments. We all should collectively #BoycottbollywoodForever so such things won’t happen.

@aubankindia Aamir is a known Hindu hater and now you have proved that your organization is a Hindu hater too. Shocked at how any org could so openly demean Hindu traditions in the disguise of being a change advocate. #BoycottAUBankIndia #BoycottAUBank #boycottausmallfinancebank

Some of the netizens also slammed Agnihotri for tweeting such content just to satisfy his personal grudge against Khan and the entire Muslim community and said that if he wanted to highlight the corruption issue pertinent to the banking companies, he would’ve easily done so without tweeting about the ad.

The bank and Aamir Khan should tender a public apology to all Hindus#KiaraAdvani#AmirKhan_Insults_HinduDharma pic.twitter.com/1VG9nsyX37

@vivekagnihotri - Since when have you made the transition from #FilmMaking to #TraditionCustodian.

Focus on your work, one hit wonder, rather than having an opinion on everything, just to stay in limelight.

However, there was a slew of Twitteratis who urged AU bank to take down the ad from all social media handles and issue an apology for disrespecting the culture.

Here is a demand of Hindus that, AU Bank should immediately remove this ad from all social media platforms, as well as the bank and actors Aamir Khan, Kiara Advani should apologize for disrespecting Hindu tradition...#AamirKhan_Insults_HinduDharma pic.twitter.com/pIPXBGDB2m

#AamirKhan_Insults_HinduDharma
The groom takes the first step in their new house as opposed to the tradition of the bride doing so.

Aamir says, “Why should traditions that have continued for centuries continue to do so?.

Hindu tradition is that the bride enters the household first,
Because we Hindu believe that the bride is the form of devi Laxmi.#AamirKhan_Insults_HinduDharma

Why is that Sanjay Aggarwal, the owner of AU bank wants to see "badalav" in hindus but not in Islamic rituals?
Why can't India show him some badalav for a change & completely boycott this bank!

However, post the takedown, some netizens also expressed that they felt disappointed with AU Bank for succumbing to social media trolling due to the alleged religious discord.

@vivekagnihotri
What's wrong with the ad? I think it is beautifully made & makes a relevant point abt choices .U have 2 come out f d echo chamber of narrowly defined religious norms 2 understand ths.Btw bank is not doing activism. https://t.co/xzVPZeSaKC

Being a director can't u understand creativity? this is just an advertisement there are many son in law's in India who stays at wife's home because of unemployment and many other reasons, will u add a propaganda in their personal life too? https://t.co/0tKlfcjYX4

Btw aajkal kai sari dulhan haste hue bida hoti hain, aur ghar jamai banne ka culture bhi koi naya nhi hai😄
There is nothing new in this add, we r already ahead
Hindu religion is willing for change that's why they only use hindu traditions. They cannot do so with others. Ironic! https://t.co/H5APz9xejv