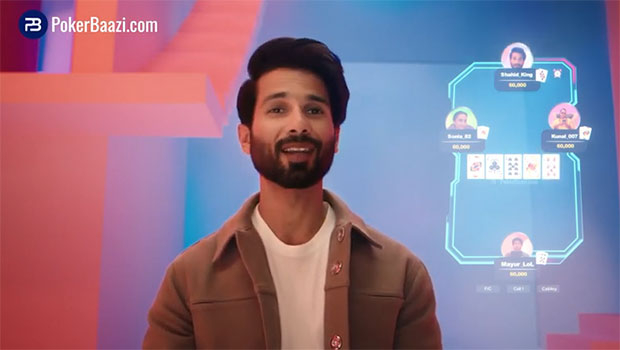 PokerBaazi has announced the launch of two new brand films in continuation of the “You Hold the Cards” campaign.

The campaign is going live during the ongoing Asia Cup for the Indian audiences and will be featuring the company’s brand ambassador Shahid Kapoor.

While the first brand film of “You Hold the Cards”, launched in July this year, concentrated on the brand messaging of debunking the myth of luck playing an upper hand contrary to the fact that skill is the key factor in championing poker.

The new films will be focusing on the product USPs that differentiates the brand from the rest in the category. Through the new brand films, PokerBaazi brings forth some of the interactive features that the app has to offer like emojis, throwables, real-time player stats amongst others that makes the game play more interesting and enjoyable.

Varun Ganjoo, Co-Founder and Marketing Director – Baazi Games, said, “The journey so far has been rather overwhelming. We are thrilled to see the love and acceptance that the brand film has received from the audiences in merely a month of “You Hold the Cards” campaign. The campaign got us a big uptick across the user funnel and was impactful in communicating that Poker is a skill sport. With our next set of films, we are certain that our audience will be able to connect more deeply with the product USPs that the app has to offer. With “You Hold the Cards” campaign we intend to set the record straight that poker is a sport where you play with your skills and can have a lot of fun at the same time.”

These films have been conceptualised by Wieden+Kennedy and produced by Daga Productions.

“If you look at Shahid Kapoor’s journey, you will see that his unconventional choices had a big role to play in his achievements and that resonates a lot with what PokerBaazi represents - People can write their own destiny. This intersection of fun with talent, skills and attitude is an ever-expanding space. Both PokerBaazi and Shahid are acing with this mantra. As far as producing these films are concerned, we wanted to make the campaign more appealing while using some of the amazing features of the PokerBaazi app. We used some fun elements to make it an entertaining watch," said Yash Daga, Director of KPRD Fiberboard Advertising and Daga Productions.

The campaign films will be visible across digital platforms as well as mainstream media channels.