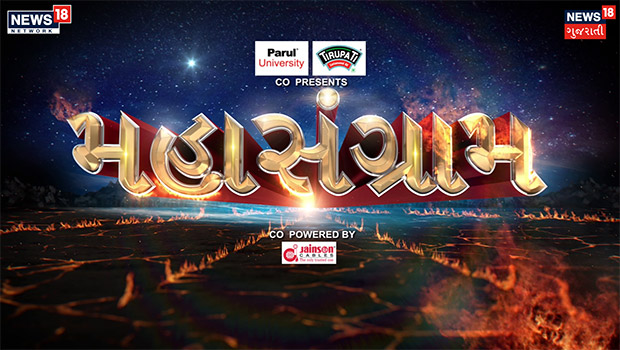 With the upcoming assembly election, News18 Gujarati is slated to cover the mood of the common Gujarati about political parties with a mega campaign ‘Mahasangram’.

Starting in September 2022, the campaign will run for 120+ days with 532+ episodes and 8+ lives shows featuring many live shows on the upcoming election in Gujarat.

Elections navigate the political pulse of India, and hold the loudest debates in every Indian household.

‘Satta No Sangram’ will showcase the anchors visiting different cities, towns, and villages of Gujarat with exclusive debates featuring local leaders of various parties presenting the point of view of the voters. This half-hour show will run for 70 episodes on weekdays.

Taking over the weekends will be ‘Samrangan’, a one-of-a-kind live debate show featuring leaders of the ruling party and opposition in front of voters, held across 8 major cities of Gujarat, namely Ahmedabad, Bhavnagar, Baroda, Surat, Rajkot, Jamnagar, and Junagadh, with each episode focusing on the voters of a particular city.

On ‘Otla Parisad’, three female anchors will speak with one leader of each political party in a detailed discussion on different issues. This half-hour show will run for 16 episodes on weekends. Lastly, ‘Chakrvyuh Ma Chehro’ will bring out the party manifestos and vision of major political leaders for the upcoming elections. This will be an hourly interview that will run for 10 episodes and will go on air on weekends.

The shows will feature interactions of voters with leaders, live debates, Q&A with the MLAs, and interviews with prominent political leaders of the state.

Finally, it will have five special election programs. They are ‘Dharasabhyo nu Sarvaiyu’ – a show on MLA analysis, ‘Rajyog’ – a show predicting and revealing fortunes of each MLA, ‘Netaji Rubaru’ – an insightful show on leaders’ performances during elections, ‘Netaji No Rapid Round’ – a Q&A show with leaders, and ‘Yuva Mut’ – a show highlighting youth's perspective about the election and their favourite leaders.

With these three categories, the brand will also feature special segments showcasing the voters' expectations for the next election. By bringing exclusive coverage from all corners of the state, News18 Gujarati will conclude the campaign with detailed reporting on polling and counting days.

‘Mahasangram’ is Co-Presented by Parul University and Tirupati Oil and Co-Powered By Jainson Cables.