The campaign’s tagline "Myntra Big Fashion Festival. India's Biggest Fashion Dhamaka. Don't Waste Time" pivots on the scale of the festive event, positioning the platform as the starting point for everything fashion, for this festive season 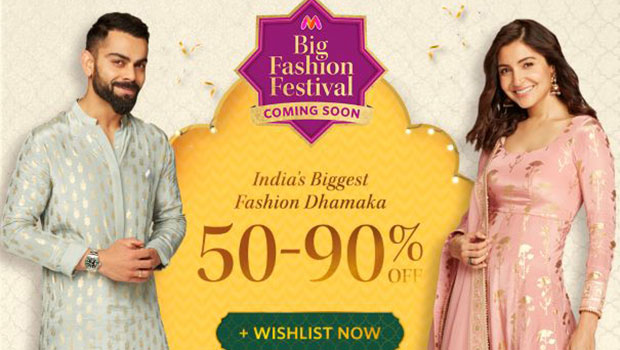 Ahead of its festive carnival, Big Fashion Festival (BFF), Myntra has rolled out a marketing campaign with the power couple, cricketer Virat Kohli and actress Anushka Sharma.

Myntra said that their presence will help Myntra connect with the couple’s incredible fan base, while also allowing the company to reach over 250 million fashion lovers of the country, combining the existing and new customers, apprising them of Myntra's range of festive offerings.

The campaign’s tagline "Myntra Big Fashion Festival. India's Biggest Fashion Dhamaka. Don't Waste Time" pivots on the scale of the festive event, positioning the platform as the starting point for everything fashion, for this festive season. The marketing campaign effectively highlights Myntra’s proposition of the biggest brands, styles, and products and offers to reach every part of the country and demography, with the central message of the campaign that urges shoppers to look nowhere but Myntra for all their festive fashion needs.

As part of the platform's multi-channel activation, 1000+ high-impact celebrities, an army of India’s much-loved influencers and content creators are set to drive awareness via visual content that showcases curated fashion ranges, ethnic wear and other festive fashion segments.

The storyboard of the ad films takes the humourous route to hold the audience’s attention on the subject. The narrative evokes a sense of amusement in the viewer by snubbing the celebrities and their esteem, to focus on Myntra’s Big Fashion Festival, seemingly more worthy of their attention and importance than the celebrities themselves, thereby leaving them both embarrassed and at the same time amused! Thus, by circumventing the obvious, which is to eulogise the stars, the storyline keeps the audiences on tenterhooks, before revealing the real star of the story to be Myntra’s Big Fashion Festival.

The celebrities in question here are Virat and Anushka, used to public gaze and attention, who are seen presenting themselves at a press event in one of the ad films. They find no interest from the media whatsoever, to click their picture or even ask a question, as the latter are busy engaging in making the most of the Big Fashion Festival on their phones, implying the arrival of the mega shopping carnival- a far more exciting event than engaging with the celebrities.

The concept of the campaign is to take a dig at celeb culture and bring out the bigness of the event, where even the biggest celebs can’t help themselves but get in on the action. It is an event so big that everything else seems smaller, including the celebs themselves.

Kohli said, “Festivities in India are about enjoying the joys of life including spending time with friends and family and celebrating the diverse cultures of our country. Looking and feeling good is quintessential of any festival, and fashion plays an important role in achieving this. I am excited to be part of Myntra’s new campaign which is about getting festive ready, shopping trendy fashion and  taking the celebrations a notch higher.”

Sharma said, "The festive season always brings with it good vibes and fashion adds a lot to that vibe. I am glad to be a part of Myntra’s marketing campaign, with fashion at the heart of it and aimed towards making festive moments even more special for people across the nation."

Nandita Sinha, CEO, Myntra, said, “The festive season is the most-awaited time of the year. Fashion plays a pivotal role to such festivities, acting as a cultural glue enabling everyone to share the joyous sentiment. Our marketing campaign is a reflection of the celebratory mood of people of the country, that comes after two years of festivities hosted in a close-door setup, and drives home the point that when it comes to festive fashion shopping, they look nowhere but Myntra. With a wide selection of products in the offing, Big Fashion Festival  is all set to make this festive season even special for our consumers.”