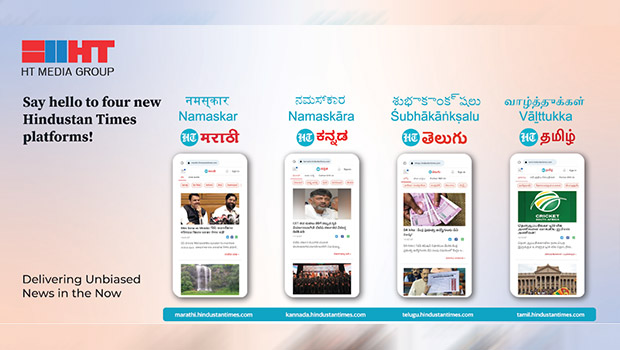 This launch marks HT Media Group’s deeper foray into India’s heartland with a mobile-first and a product-focused approach.

The digital news platforms will cater to the younger audiences of the new India who wish to consume content in their native language helping them feel more connected to their roots.

HT Media’s print, digital and audio properties, now in 7 languages, reaches over 240 million people across India, as per the company.

Powered by a network of journalists and content producers across the five regions, the local footprint of HT Media is stronger than ever before.

“At a time when millions of Indians are looking to consume content in their native language, Hindustan Times aims to be the go-to, mobile-first publication for young Indians to get credible news and an authentic regional content experience without having to use translation capabilities, thus retaining the essence of regional news stories. For us, this journey started with the launch of HT Bangla, and within the last two months, we have launched four Indian language platforms, strengthening our regional presence even further in India,” said Puneet Jain, Chief Executive Officer - Digital, HT Media.

“According to the Google Search 2020 India Report, there’s an 80% increase in local news searches on Google year-on-year. There’s a massive wave towards regional content across platforms, and as content creators, we understand the need of the audience to consume content in their mother tongue—both from the comfort and the sentiment perspectives—and this launch is a testimony to that,” said Prasad Sanyal, Chief Content Officer, HT Digital.

With HT Marathi, HT Kannada, HT Telugu and HT Tamil, Hindustan Times will take a leap into the regional news content territory, maximising its non-English, non-Hindi-speaking user base in India while presenting an opportunity for advertisers to connect with and target large audience cohorts specific to India’s regional markets

This will also be an opportunity for local, regional and national brands to specifically target region-based audiences and deliver localised activation campaigns. Hindustan Times plans to leverage its new regional user base to market its existing and upcoming region-based IPs and drive deeper engagement.

“Going regional will add unique opportunities for advertisers and the new-age, hyperlocal brands to target specific region-based audience cohorts for local launches and activations, and to make a deeper brand connection by reaching out in the language their consumers speak. It would be exciting to see how localisation will play a pivotal role in how brands communicate with linguistically diverse consumers,” Jain added.