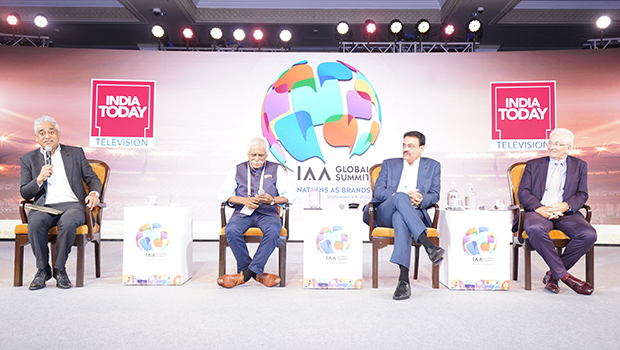 Day two of the IAA Global Summit saw dignitaries from across the globe share their views on “Nations as Brands”. Peter Knapp Chairman of Landor & Fitch, UK, set the stage for the day that captivated the audience at the conference.

Through a brief presentation on the remarkable campaigns his organisation had executed, Peter Knapp said that communication should ensure differentiation to achieve relevance to the audience.

When Surya Kotha, Founder and CEO of Xienz LLC, USA, took the stage, little did the audience expect to bear witness to a future that is not as far away. VR and AR, the hot topics, came alive in front of the hall when a product from a magazine was displayed in 3D on the screens.

As the day progressed, many speakers shared their unique views on the theme. Md. Ashiq and Mahalingam Ramasamy, CEO and Managing Director of Netcon Technologies, respectively, brought the audience’s attention to how connections are not just a technology that exists outside, they have existed within human beings. They emphasised the idea of leveraging this internal and external connection and empowering India.

The stage was then handed over to Israel and Ambassador Ido Aharoni Aronoff, Founder of Brand Israel, who weaved the story of Israel through his presentation on the nation that had achieved the status of a start-up nation. The spirit of ‘survivability’, he said, has been represented by Israel in its zeal to become a world-class brand. He told the audience how Israel had its boundless creativity to offer to the world and it emerged as a creative power due to its capabilities. But just like other international representatives, he had nothing but praise for the brand India and its status in the global market.

Following his session, the stage was taken by Suraj Saharan, Co-founder, Delhivery, and Pradeep Pant, Board Member, Rawstone Co Taiwan, Former MD of Taipei Fubon Bank. They talked about the possibilities of technology and building an operating system for commerce. Pant spoke about how digital payments will transform our future. Suraj Saharan outlined the journey of a startup and how it became a Unicorn.

When we talk about Nations as Brands, how can we forget cricket - a sport that united the world and now stands as almost a religion for every nation? The legends in the world of cricket - David Gower, Former Captain of England Cricket Team, Dilip Vengsarkar, Former Captain of the Indian Cricket Team, and Ayaz Memon, Sportswriter, Journalist, and Author - graced the audience with their presence to talk about cricket’s inception in England and its transformation through ages. Starting this part of the conference, David Gower shared his experiences as a cricketer, referring to the amalgamation of old and new in the cricket world in the brand journey of cricket and cricketing nations. The panel discussion was moderated by Rajdeep Sardesai, Senior Journalist, Author, Columnist, Ultimate Newsman, and Consulting Editor - India Today Television.

The panel was a delight for the audience that got to hear inside stories and behind the scenes from the cricketers and cricket commentators. They talked about cricket becoming a huge brand in itself and entertaining audiences for decades.

As the conference travelled the world, it landed in India towards the end of the two-day summit. DK Hari and Dr DK Hema Hari, Founders of Bharat Gyan, and Ramesh Vangal, Chairman of Katra Group took the stage to enlighten the audience about the brand India through the ages. The hour was filled with stories of India and what it bestowed upon the world - bronze, zinc, yoga, the number zero, various dyes, Ayurveda, etc. The audience was asked to understand the brand India, own it and amplify it to the rest of the world. A truly enlightening session, the walk through the ancient cultures of India brought many new facts to the attention of the audience.

Bharatbala, Producer, and Director explained how he worked to capture the spirit and heart of India and its inhabitants. A performance that gave goosebumps to the audience, paid tribute to Lata Mangeshkar. He exhorted the audience to know more about India and then spread the message of Brand India, with pride. The conference came to an end on a positive and enlightening note.