It is alleged that the rear seat airbags did not deploy with the impact of the accident killing Mistry and his co-passenger. However, a videography of the damaged car showed a green cover on the windows which works as airbags for the rear seat 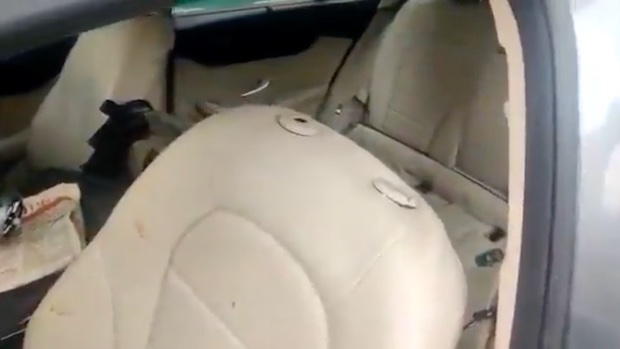 Videograb of the rear seat where Mistry was seated

Former Tata Group chairman Cyrus Mistry passed away on Sunday in a road accident near Mumbai.

Mistry and three others were headed to Ahmedabad when the accident took place near Palghar after the driver lost control of the car and banged in a river bridge. Mistry suffered grievous injuries due to the accident and was rushed to a nearby hospital, where he was declared dead on arrival.

It is alleged that the rear seat airbags did not deploy with the impact of the accident killing Mistry and his co-passenger.

Several media reports including police statement suggest that the rear seat airbags were not deployed.

However, a videography of the damaged car showed a green cover on the windows which works as airbags for the rear seat.

With many people raising their concerns about the safety concerns in a Mercedes-Benz GLC, India’s largest-selling luxury brand’s best-selling model, the high-end brand’s image is set to take a beating, according to brand experts.

Speaking with NewsDrum, Brand Guru Harish Bijoor, Founder, Harish Bijoor Consults Inc., said that this incident will surely hit brand Mercedes if this is a truth and not a rumour.

“Brand Mercedes and its safety standards stand punctured if the reports are true,” said Bijoor.

The Global NCAP tests cars on various parameters and assigns a rating out of 5 stars primarily on adult and child safety.

In Mercedes Benz GLC there are 7 Airbags with Knee Airbag for Driver.

Another brand expert who did not want to be named on this matter said that no matter what the specifications are or what Mercedes will say on this, a common man thinks safe after hearing 7 airbags.

“How would a customer know that out of 7 airbags, no one is able to save the passenger sitting on the rear seat. This is surely going to dent the brand when it comes to new buyers,” the expert said.

Earlier this year, the road transport ministry said it would make it mandatory for carmakers to provide a minimum of six airbags in motor vehicles that can carry up to 8 passengers for enhanced safety of occupants from October 2022.

What we know of #CyrusMistry accident so far from media.The lady driver lost control of #Mercedes and hit divider.Front seat airbags deployed & saved driver and co passenger.Rear seat airbags did not deploy.Both passengers killed.Rear seats not mangled.Mercedes has much to answer

Sad to hear about the untimely demise of Mr. #CyrusMistry in a road mishap due to collision with a road divider. #RIP

How did the airbags in the @MercedesBenz not save the passengers?

A few Twitter users saw some conspiracy behind Mistry’s death and demanded investigation into this incident.

I am middle class person owning a car which has airbags to protect. I am sure his car would equipped with best tech to save during accident!!

Shocked to learn about untimely demise of kind hearted #CyrusMistry
My questions:
1. Why was he traveling by a car for 10 hours journey?
2. Why the Mercedes airbags didn't saved him?
Is there any conspiracy behind these accident? pic.twitter.com/yTKQg0HTE8

This is definitely a debatable one about the credibility of working of Airbags in Automobiles of India.

Thinking about these luxuries companies who are taking huge money on the fake promises of safety.