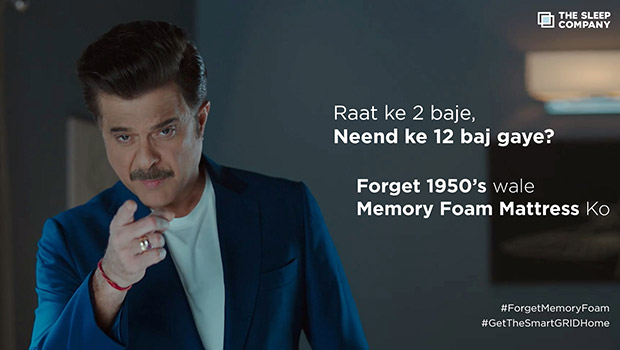 The Sleep Company has launched its second brand campaign – Forget Memory Foam, Get SmartGRID Home with brand ambassador Anil Kapoor. In the campaign, the actor advocated shifting away from the 1950s-style memory foam mattress to the new-age SmartGRID technology.

The advertising campaign is in a comedy roast format and it highlights the problems people face after sleeping on a memory foam mattress. It is told from the point of view of a young couple using such a mattress who complain about the usual problems that people face after using memory foam such as backaches, sweating throughout the night, difficulty sleeping and much more. Hearing this, Kapoor heroically swoops in to save the “night” and educate the couple about how they should discard their memory foam mattress which is an outdated concept and instead invest in a revolutionary SmartGRID mattress.

The company said, “unlike Memory Foam, The Sleep company's patented SmartGRID Technology is made up of hyper-elastic polymer which is laid out in a grid structure that provides- Softness, which relaxes your pressure points and Firmness, which supports your back. Developed by a DRDO scientist, SmartGRID has 2500 air channels that help in better circulation throughout your sleep and keep you cool.”

Kapoor said, “I am a big believer in the quality of sleep over quantity of sleep. Ever since I shifted to The Sleep Company’s SmartGRID Mattress, I haven't had any complaints of back pain or difficulty sleeping. This just goes to show that the brand really delivers on its promise of improving the entire sleeping experience. Having been associated with the brand for over a year now as a Brand Ambassador as well as being a customer, I can without an iota of doubt say that their patented SmartGRID technology is way more effective than memory foam mattresses”

Priyanka Salot, Founder, The Sleep Company, said, “The Sleep Company’s SmartGRID technology is one of the advanced technologies that has revolutionised the mattress industry in the last 2 years. Our aim with the new campaign is to educate consumers on how memory foam mattresses can cause sleep problems. We invented The Sleep Company with the vision to upgrade the quality of sleep for our customers. We have big plans for The Sleep Company in terms of products as well as market expansion and with this campaign, we look forward to further strengthening the brand’s visibility in the Indian market.”