The channel also officially announced Dhoundial’s appointment as an Executive Editor, she will host the channel’s flagship show and will report to Nikunj Garg, Managing Editor, Mirror Now 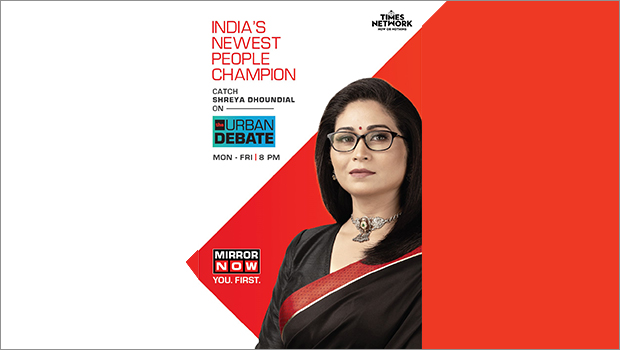 Mirror Now has announced the appointment of Shreya Dhoundial as its Executive Editor. In her new role, Dhoundial will host the channel’s flagship show, ‘The Urban Debate’ at 8 pm.

Dhoundial will also be an integral part of the editorial leadership team driving the channel’s efforts to deliver accurate, relevant, and unbiased news to its viewers. Based out of Mirror Now’s Noida office, she will report to Nikunj Garg, Managing Editor, Mirror Now.

A renowned prime time anchor, Dhoundial has closely tracked national security stories and has been credited for reporting the biggest stories across the spectrum, including 26/11 attacks, India-China standoff at the LAC, and Covid Crisis amongst others.

Garg said, “We are delighted to welcome Shreya to the Mirror Now team. With an in-depth understanding of the real essence of news, Shreya truly embodies Mirror Now’s brand ethos and is a valuable addition in fortifying the brand’s narrative of delivering news stories that influence, engage and impact. Raising national interest on critical topics like women safety, gender equality, energy crisis, gaps in urban infrastructure and climate change, ‘The Urban Debate’ is a highly viewed and critically appreciated news show that has redefined the prime-time news landscape. I am confident that Shreya with her sharp journalistic acumen and domain expertise, will take the show to new heights and lead national issues with a clear agenda of impacting change.”

Dhoundial said, “I’m honoured to join Mirror Now, a brand that has always been aligned to the people’s pulse. The channel has consistently raised issues that really matter to citizens and influenced positive impact. This content philosophy has always resonated with me and that brings me to Mirror Now. I look forward to being a part of this very talented and dynamic team. On 'The Urban Debate' my aim will be to demand answers and accountability from the powers that be.”