The show started airing July 4, and listeners can tune in at 9 pm, every Monday to Friday to enjoy the show 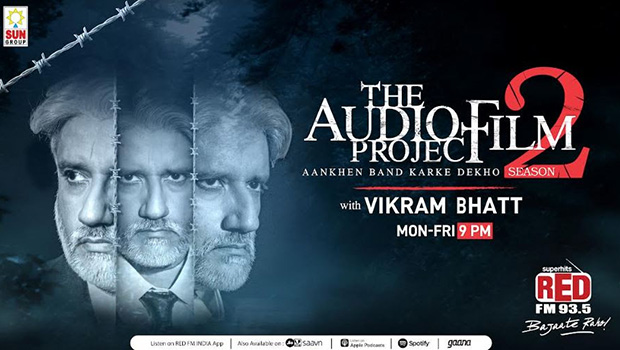 Red FM, the private radio and entertainment network, has announced season 2 of ‘The Audio Film Project’. The radio show is being hosted by filmmaker Vikram Bhatt.

The show started airing July 4, and listeners can tune in at 9 pm, every Monday to Friday to enjoy the show.

The first season of the show was released last year and was critically acclaimed among listeners. The sound experiences and narration by Vikram Bhatt deeply affected the listeners and made the show a tremendous success.

After outshining himself as the director of high-intensity dark movies, Bhatt is back in the role of an uncanny storyteller with season 2 of Red FM’s ‘The Audio Film Project’. In the 12-week on-air show he will be telling six spine-chilling and nail-biting suspense, mysteries and crime tales that will take the listeners on a gripping ride.

Bhatt said, “I thought of The Audio Film Project because Nisha Narayanan at Red FM was enthusiastic enough to partner with it and also clever enough to see how the changing world can actually be augmented by this sense of closing your eyes and imagining a story. It was Red FM that came up with this title, The Audio Film Project because it was a film on audio and it was their ingenious line that says ‘Aankhen Band Karke Dekho’ which is fabulous and with that we are coming up with the second season. This season is nothing but the permission the audience has given us to continue. Whenever I had a successful film and I was asked how I felt, I said to myself and to the people who asked me that a successful film is nothing but the permission to make another one, and The Audio Film Project Season 1 gave us the permission to make the next one. That is special and I am grateful to the listeners who have made this journey into something spectacular. I thank them and I thank Red FM for having faith in me and in the fact that people can see with their eyes closed.”

The ‘Audio Film Project’ will also be available on Red FM India app and all leading podcast platforms.