The theme of the summit, to be held on July 29 by the India chapter of IAA, is gender portrayal across the creative spectrum from a 30-second TVC to a 3-hour film 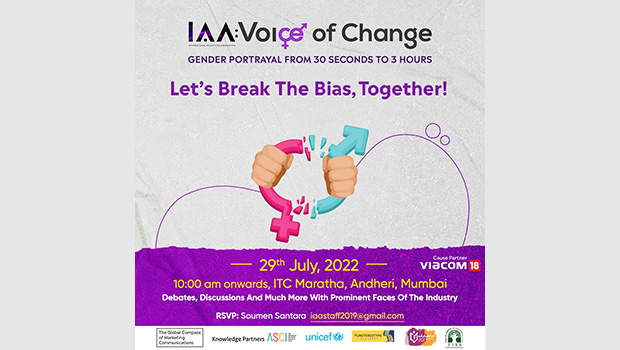 The summit will be held on July 29 at ITC Maratha, Andheri, Mumbai. The theme of the summit is gender portrayal across the creative spectrum from a 30-second TVC to a 3-hour film.

At the summit, prominent voices of the industry will be speaking on why it is of paramount importance to ‘Break The Bias’ that surrounds the industry when it comes to gender depiction.

The Voice Of Change, an IAA initiative, was started as a behaviour change communication initiative which was aimed at addressing the skewed portrayal of gender in the field of advertising and communication with the launch of the Geena Davis study with UNICEF, in September last year.

The facts presented in the study, based on the evaluation of more than 1000 plus ads, showed a disturbing trend of widespread gender stereotyping and prejudice.

On the backdrop of such ground-breaking research being done, the IAA has stepped up to bring all this knowledge and more out in the public eye under an umbrella banner through this summit. The aim is to ensure that the discourse reaches the right people and sensitises all creative minds and industry forces to drive palpable change.

Megha Tata, President - IAA India, said, "IAA has always brought forward initiatives that are meaningful and gender-sensitive, on and off screen and has also been the one who has always taken the lead on this issue in the industry. We felt that it is time for all of us to come together and be the voice of change. We want to address the dialogue of gender discrimination across the media spectrum and hope we will collectively bring much needed change in the system."

"Over the last decade, women have broken stereotypes in this industry both behind the scenes and on the screen. It's time we tell more of those stories and break biases. Through this change summit, the IAA brings prominent industry voices to communicate, converge and be the Voices Of Change that we need to empower the narrative," said Nina Elavia Jaipuria, Chairperson, IAA Women Empowerment Committee

Tags: IAA Voice Of Change summit on gender sensitisation in media
Advertisment
More from this section