Two-thirds of IPL fans claim to have watched all matches this season on TV while a third caught the action online: YouGov

The research reveals that although men are more likely to be super fans of the recently concluded IPL 2022, women are not far behind 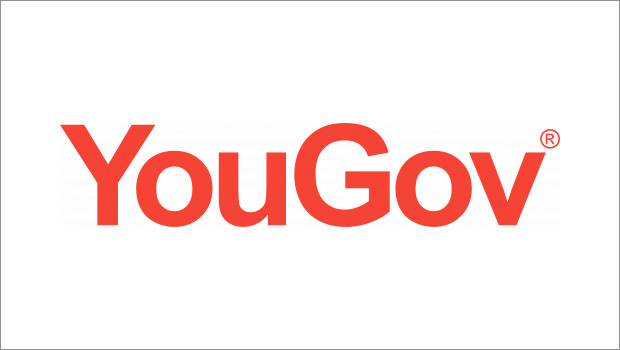 Two-thirds of IPL fans said they watched all matches of the recently concluded season of the league on television while the remaining third viewed it online, as per a research by YouGov.

The research becomes all the more important as the IPL media rights auction concluded yesterday with two separate broadcasters for TV and digital.

YouGov's latest research among 1,012 urban Indian respondents between May 31 and June 3 revealed that two-thirds of urban Indians (67%) claim they followed IPL 2022. Of these, a third (33%) said they watched every match of this season.

The others definitely watched when their favourite team/ player were playing (37%), when there were main matches between rival teams (18%), or on other occasions.

The research further revealed that at 36%, men are more likely to be super fans of IPL 2022 (who watched every match this season), but women are not far behind and three in ten of them (30%) said the same about their viewing frequency of matches.

YouGov’s research further stated that among super fans of IPL (both men and women), TV seems to be the most popular medium, as two in five (42%) of them claimed they preferred watching this season only on TV, while a quarter (25%) said they mostly watched it on TV but sometimes online. In comparison to this, only one in ten (11%) watched it online, while a fifth (20%) claim they mostly saw it online. 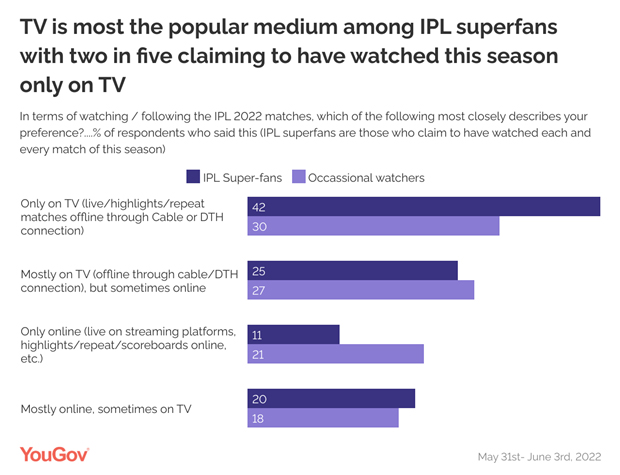 The experience of watching matches on a big screen is looked at as a form of relaxation and recreation among super fans. Nearly half said they watch IPL on TV because it is a way of relaxing after a hectic work day and because it allows them to enjoy matches with friends and family on a single screen.

In contrast to this, online was a more popular medium among occasional watchers of IPL, and they were more likely to catch the action online as compared to their counterparts (21% vs 11%).

When it comes to frequency of watching matches, super fans were way more likely than others to say they watched more matches this season, and their reason for doing so was because they felt this year’s matches were more interesting than last year. Many felt introduction of new teams and good performance of their favourite team/ player led to an increase in their frequency of watching matches this season.

On the other hand, occasional watchers were more likely to say they watched fewer matches this season, mainly because of less available time due to reopening of office (39%), followed by non-performance of favourite team/ player (38%) and uninteresting new IPL format (20%).

While there are discussions around declined TV viewership this year compared to last, data from May 2022 suggests that this could actually reflect a shift in viewing platform as a large proportion of viewers migrated to OTT platforms and it grew by 305% year-on-year.

Towards the end of the tournament TV viewership did see an increase (especially during the last 4 matches). The cumulative reach therefore of TV+ OTT this year could actually be the highest ever viewership of IPL, at 426 m.

Joseph Eapen, Managing Director, YouGov Sports India, said, “Although TV remains the most preferred medium, online has gained momentum in the past years. IPL's evolving nature and the rise of interactive cricket content consumption on second screens, led by smartphones, has made it possible for brands to cut the clutter and connect with their audiences in a more meaningful and effective way. It is crucial, however, for brands to understand what motivates and limits viewers in order to create strategies that make a real difference.”