Fans across India can watch all the scintillating action Live and exclusive on Star Sports Select and Disney+ Hotstar from June 27 to July 10, 2022 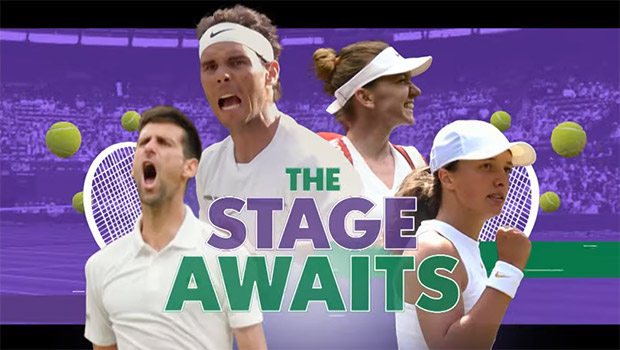 The 2022 Wimbledon Championships will mark 100 years of the iconic Center Court and to celebrate this occasion, Star Sports has launched a promo featuring the ‘King of Clay’ Rafael Nadal, defending champion Novak Djokovic, World No 1 Iga Swiatek, and former Wimbledon winner Simona Halep.

After a captivating clay court season, the focus now moves to the lush green grass courts of the All-England Club, as the best from the world compete for the most prestigious tennis tournament of the lot, Wimbledon 2022.

The promo, created and conceptualised by the in-house team at Star Sports, epitomises the aura surrounding the atmosphere during the fabled clashes on Centre Court.

Fans across India can watch all the scintillating action Live and exclusive on Star Sports Select and Disney+ Hotstar from June 27 to July 10, 2022.

The King of Clay, the World No. 1, former champion & the reigning champion are raring to go at the Centre Court in #Wimbledon - the epicentre of tennis! 🤯

Wimbledon 2022 will witness Serbian ace Djokovic attempt to defend his title and catch up to Nadal's tally of 22 Grand Slam crowns. The Spaniard, who triumphed at Wimbledon twice – in 2008 and 2010, has now won 22 Major titles, two more than his rivals Roger Federer and Djokovic, eyeing his seventh title in London.

Meanwhile, the women's draw will see a new champion crowned after last year's winner Ashleigh Barty announced her retirement earlier this year. World No 1 Iga Swiatek will start as the overwhelming favourite in the women's singles event while Simona Halep, winner of 2019 Wimbledon, will look to re-establish her dominance in this coveted tournament.

Seven-time Wimbledon champion Serena Williams will make her much-anticipated return to the grass court after being handed a wild card entry. Williams is one win away from equalling Australian legend Margaret Court's record of 24 Grand Slams in the Open Era.

Home and crowd favourite Emma Raducanu will also look to dish out an impressive performance after her inspirational campaign last year.