Through the campaign, the channel wants to promote its proposition that it aims to empower every hard-working urban Indian with a better life, that they deserve 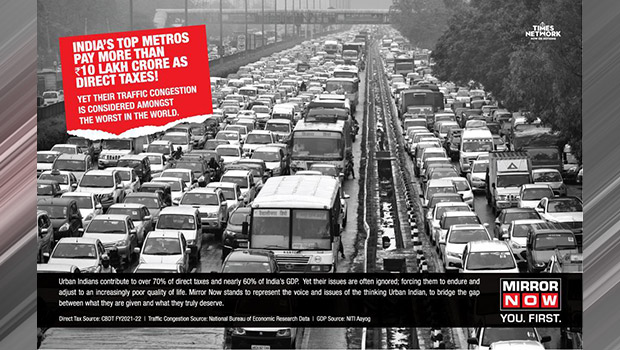 Mirror Now has launched the first phase of the ‘Urban Lives Matter’ campaign in the form of print ads in several leading publications.

Through the campaign, the channel wants to promote its proposition that it aims to empower every hard-working urban Indian with a better life, that they deserve.

In one of the print ads, the channel has picked up traffic-related issues that urban Indians face. The print ad mentioned a pertinent challenge that the people in metros face. It read, “India’s top metros pay more than Rs 10 lakh crore as direct taxes, yet their traffic congestion is considered amongst the worst in the world”.

The ad further mentioned, “Mirror Now stands to represent the voice and issues of the thinking urban Indian, to bridge the gap between what they are given and what they truly deserve.”

The channel overhauled its on-air look with a relatable and upgraded colour palette and modernised typography, The channel also introduced a new colour ‘teal’ to its visual design to reflect its young and contemporary approach, besides retaining the colours, black, white and red denoting importance, urgency and current news.