The film is a part of Colgate India's 'Smile Karo Aur Shuru Ho Jao' (Smile and Get Going) philosophy, which the brand has been adhering to for more than three years now, sharing inspiring real stories from across the country 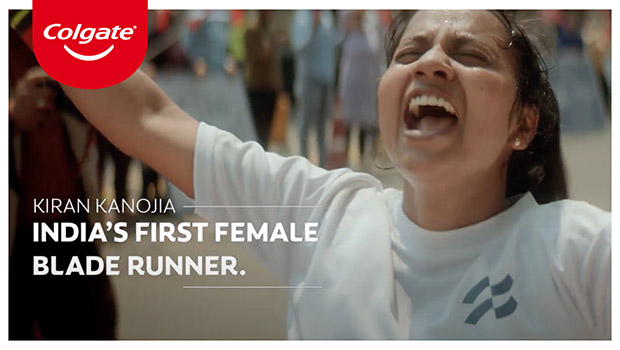 Colgate-Palmolive has released an inspiring true story of Kiran Kanojia, under its 'Smile Karo Aur Shuru ho Jao' campaign as part of its ongoing effort to promote optimism over self-doubt.

Colgate India has been bringing its 'Smile Karo Aur Shuru Ho Jao' (Smile and Get Going) philosophy to life for more than three years now, sharing inspiring real stories from across the country. The initiative aims to encourage us to embrace optimism in the face of adversities and choose a smile as the secret weapon to dissolve all negativity and go forth and create the life of our dreams.

Continuing to deliver on the above message, Colgate has launched their latest campaign celebrating Kiran Kanojia’s inspirational story. The ad begins from the point in life when Kiran, at the age of 25, was pushed off a train by robbers trying to steal her bag, and her left leg was crushed.  Doctors had to amputate her leg to save her life. But she decided to fight the odds and not give up. With her unwavering persistence and willpower, she not only begins to walk but accomplishes her first-ever marathon as a blade runner. Today she is known for not just her courage but also as an evangelist for spreading hope and confidence amongst others. The Colgate ad aims to bring back a spark in the viewers to battle their own odds and not give up till they reach their desired point in life.

Arvind Chintamani, Vice-President, Marketing, Colgate, said, “Colgate believes that optimism has the power to move mountains and Kiran is a shining example of our philosophy. We are huge fans of Kiran’s indomitable spirit that made her India’s first female blade runner to complete a marathon and we promise to continue to support and inspire everyone, every day to be more positive and optimistic and remember to smile and get going.”

Delna Sethna, Executive Creative Director, RedFuse, said, “Under that diminutive, soft-spoken exterior Kiran is a powerhouse, full of heart and courage. Her story will, I believe, inspire people. Not to take up marathoning, but to take the path less trodden. One that’s tougher. One that pushes you. One that knows no matter what, there is a light at the end of that long, dark tunnel.”

On this journey, Colgate India has highlighted stories of some remarkable people who, with their courage and positivity, overcame huge obstacles in their respective lives and became torchbearers of hope for millions. These names included Divyanshu Ganatra, India’s first visually-impaired solo paraglider; Yashaswi Jaiswal, the youngest batsman in the world to score a double century in List-A cricket; Late Sindhutai Sapkal, the adoptive mother of over 1400 orphaned children and Arunima Sinha, the world’s first female amputee to climb Mount Everest.