This year at Cannes Lions, Greenpeace activists have made it a point to make the advertising fraternity realise that their creativity needs to be used for climate good and not for the benefit of fossil fuel companies 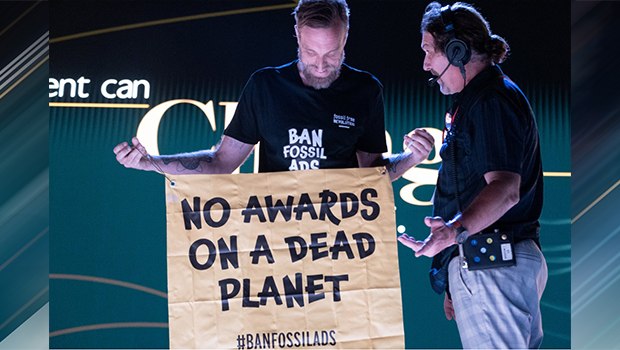 The opening night of Cannes Lions 2022 witnessed gate-crashing from a former jury member and Lions winner, Gustav Martner, Head of Creatives at Greenpeace Nordic, for which he now stands blacklisted at the International Festival of Creativity.

Ever since the Paris Agreement became a legally binding international treaty addressing climate change in December 2015, approximately 300 Lions have been awarded to advertisements promoting air travel, to oil companies that greenwash and to ads that make cars with polluting combustion engines more desirable.

🔴ACTION🔴 @greenpeacefr activist and former winner and jury of the world famous Festival of Creativity #CannesLions, interrupts the opening ceremony to call for a ban on fossil fuel advertising! 🦁🏆
https://t.co/NHYE2CZTay
#BanFossilAds #CannesLions2022 pic.twitter.com/Y73KeSLORx

As an act of protest, Martner returned the Lions Award which he had won for his creative work for automotive giant, Volkswagen. In addition to this, he also unfurled a banner stating ‘No awards on a dead planet, ban fossil ads!’ to show his discontentment against fossil fuel advertising and the need for putting a ban on it.

“Fossil advertisers and their agencies should be banned from Cannes Lions, but instead the only blacklisted person at the world’s biggest advertising event is me,” said Gartner in his interaction with The Drum.

There is a stark increase in the reckoning of the climate crisis in the advertising industry with over 40 organisations, including Greenpeace, demanding a ban on fossil fuel advertising and sponsorship in the EU through their European Citizens’ Initiative (ECI) petition.

Keeping in mind the code of conduct for the French Riviera, the authorities decided to revoke Martner’s pass for the event, as a preventive measure. But nothing could deter the agitated Greenpeace protestors in their fight for addressing climate change at the creative level.

Despite WPP’s VMLY&R Brazil being awarded two Lions for their work on Greenpeace in Cannes Lions 2022, Greenpeace France protestors, dressed as the popular ‘This is Fine’ dog meme, stormed WPP’s beach.

Silvia Pastorelli, Climate and Energy Campaigner at Greenpeace (European Unit) in her interaction with The Drum revealed that the protestors had no grudges against the creative sector as it brims with incredible energy and talent, but they would want to see this creative force to be used for good.

“We want to challenge these agencies, like WPP, that are still working with fossil fuel companies and help their clients convince us that this is still fine,” she said.

Upon being asked why did the protestors target WPP beach, Pastorelli replied that it was mainly because of their association with fossil fuel company ‘Shell’. “Despite pledging to go carbon neutral by 2030 last year, they know that their clients are responsible for the current climate crisis,” she concluded.