The event was held at Cascais in Portugal, where the Association of Indian Magazines (AIM) also spoke about its branded content studio Dastaan Hub 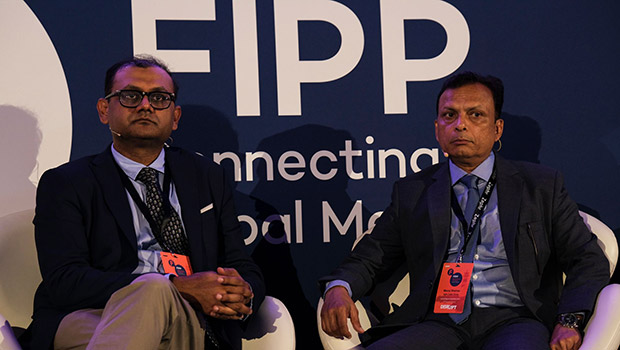 On June 8, 2022, the opening day of the World Media Congress 2022, being organised by the FIPP (International Federation of Periodical Publishers) at the seaside historic town of Cascais in Portugal, the Association of Indian Magazines (AIM) made a presentation on their initiatives for resolving distribution problems for magazines, as well as the launch of its branded content studio called Dastaan Hub.

In front of a packed audience of over 300 Congress delegates representing the biggest magazine publishers from across the world, B Srinivasan, MD of Ananda Vikatan, Anant Nath, Executive Publisher of Delhi Press, and Manoj Sharma, CEO of India Today, shared the initiatives that Indian magazine publishers had adopted during the pandemic.

Opening the session, Srinivasan, who is also the president of AIM, spoke about how Indian publishers during the pandemic, walked the delicate journey of building a collaborative working framework to address the distribution and advertising problems. He shared how an environment of trust was built amongst publishers to enable sharing of crucial information, and a shared commitment to keep working on different models was adopted, till they developed a viable solution.

Anant Nath, general secretary of AIM, gave an overview of the three-pronged strategy that the association had undertaken to resolve the deep structural distribution issues. Firstly, to address the problem of a very unorganised agency network that had been weakening over the years, an agency accreditation system has been started to identify and work with a set of certified agents who can service the market better and more efficiently. The idea is that publishers work collectively with these agents, allowing them higher volumes and building financial incentives for them, and in return secure better market coverage, across larger geographies.

Secondly, to resolve the deep-rooted problem of poor subscription deliveries, the association lobbied with the Indian Post to launch a brand new delivery service called the ‘Magazine Post’, which allows live tracking, SMS alerts to subscribers at every stage, seamless API integration with publishers’ MIS, a promise of delivery within 48 hours, and a target of 97% delivery efficiency.

Thirdly, to tap into the huge network of over 600,000 newspaper delivery boys across more than 11,000 centres in urban India, the association is working on a tech-enabled program, to enrol these vendors and delivery boys to sell and deliver magazines subscriptions. An app is under development, which will seamlessly tie in all stakeholders- publishers, accredited agents, vendors, delivery boys and readers.

The video presentation on AIM’s collective distribution initiatives can be seen here:

Manoj Sharma, treasurer of AIM, unveiled to the world stage, the branded content studio called Dastaan Hub, that the association had launched earlier in the year. The studio pools together the collective publishing assets and editorial strengths of over 100 magazines, 50 websites, and associated social media channels, to offer marketers an opportunity to narrate compelling brand stories to over 150 million readers, across 10 languages. Sharma emphasised that this was the first of its kind initiative globally, one that aims to allow innovative and compelling brand storytelling like never before.

The video presentation on the unveiling of Dastaan Hub can see here:

In his opening remarks, Srinivasan had emphasised how distribution teams and advertising sales teams of various member publishers had developed a working framework to find common solutions to their shared problems, and that for each of the initiatives, there was a detailed go to market strategy.

There was widespread appreciation of the collaborative efforts that Indian magazines had undertaken, which was seen as unprecedented.

Yulia Boyle, FIPP chair and International Head of National Geographic, said, “AIM’s presentation was a true demonstration of how the collective power of industry can “lift all boats”. Coming together to collaborate - and not compete - to address and solve incredibly complex structural problems of distribution and the future of advertising will mean more economic opportunity for media companies in India, and more foreign investment in India to reach broader audiences.”

James Hewes, President and CEO, FIPP, added, “I think AIM’s efforts in bringing together an industry-wide coalition and consensus on two really crucial areas for publishers, distribution and advertising, is a model that other associations should be following around the world. Bear in mind, as well, that these two are difficult issues to resolve for publishers across the world……so it is really great to get AIM on stage, talking about that in front of our global audience and I really hope it’s an inspiration for other organisations around the world to do something similar”.

The congress is being held for the first time after the pandemic, from June 7-9, at Cascais, Portugal. The AIM session was in the morning of the opening day of the formal program on June 8.