A conclave on 'Direct to Mobile and 5G Broadband - Convergence Roadmap for India' was organised by IIT Kanpur, in collaboration with Telecommunications Standards Development Society, India (TSDSI) 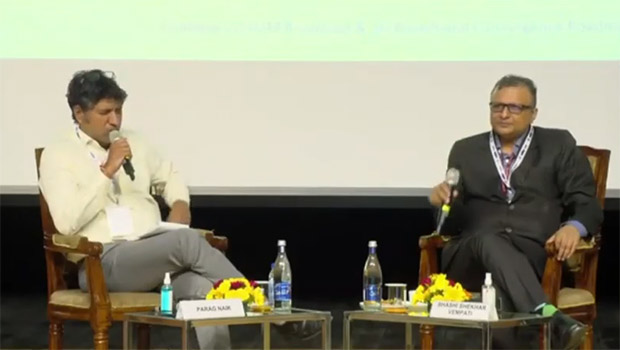 A conclave on 'Direct to Mobile and 5G Broadband - Convergence Roadmap for India' was organised by IIT Kanpur, in collaboration with Telecommunications Standards Development Society, India (TSDSI), at Akashvani Rang Bhawan auditorium of Prasar Bharati in New Delhi on June 1, 2022.

The full video of the conclave:

A video message of K Rajaraman, Secretary, Department of Telecommunications, was also played as part of the inaugural addresses. The conclave was also attended by eminent personalities from the fields of Telecom, Broadband technology and Broadcast industry.

The conclave demonstrated for the first time NextGen Broadcast technology on smartphones and other smart devices, apart from releasing a joint white paper on Direct to Mobile Broadcasting by IIT Kanpur, TSDSI and Prasar Bharati.

TRAI Chairman PD Vaghela said that D2M and 5G Broadcast conclave presents the opportunity to bring together broadcast, mobile, broadband, media and all other related stakeholders. “We all know that the digitisation of services has resulted in the convergence of individual delivery and consumer devices. The drive to provide broader services is stimulating the broadcast and broadband operators to converge into each other. It is now possible for broadband services to offer broadcasting services and vice-versa.”

Chandra said, “The convergence between Direct-to-Mobile and 5G Broadband will improve consumption of broadband and utilisation of spectrum in India. Almost everybody now is consuming video content through their mobiles, news can be seen on mobile through Apps, and even Prasar Bharati has its own NewsOnAir App which has a large consumer base. This convergence between Direct-to-Mobile and 5G Broadband will entail some changes in infrastructure and some regulatory changes.”

“The solution for satisfying the need for connectivity is to create a converged network. The convergence of broadcast, broadband and cellular networks address the problem of the coexistence of this network,” said K Rajaraman, Secretary, Department of Telecommunication, in his video message.

Karandikar, in his inaugural address, said that the increased video consumption, specially the streaming services, along with a host of new services like IoT, Group connections, emergency response communication systems, etc, have created a need and support for multi-cast, broadcast services in wireless networks.

Subramanian, Chairman of TSDSI said that the cellular industry is adopting 5G at scale and the broadcast industry now has become a part of the internet, WIFI and 5G. Together, these will drive the next wave of digital transformation across the world, in some way as connectivity forms the backbone of this new era.

DG of TSDSI Ms Pamela Kumar said that this is the right time for broadcast broadband convergence to be launched in India. India should pioneer and pilot it because we have the biggest need, being the number one data consumer in mobile communication in the world.

In a one-on-one interaction with the CEO of Saankhya Labs Parag Naik, Prasar Bharati CEO Shashi Shekhar Vempati spoke on the importance of Direct to Mobile broadcasting for a country like India from the perspective of strategic and national interest.

The white paper released at the Conclave envisions realising Direct to Mobile Broadcasting capabilities in India by the convergence of Direct to Mobile and 5G Broadband and makes recommendations for various stakeholders to act on to achieve the same.