Six children from across India were chosen by Cartoon Network, for the initiative launched recently, because of how differently they are leading change, one cause and innovation at a time 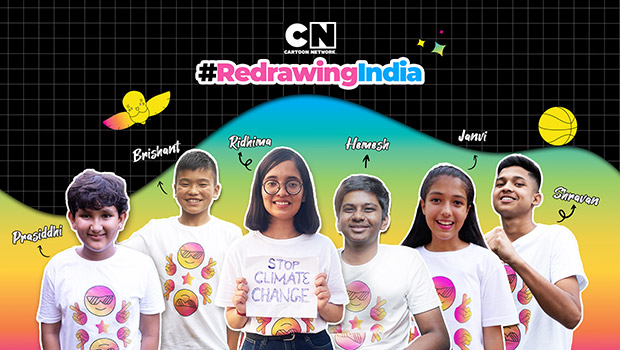 “How are you redrawing your world?” This is the evocative question six of the country’s brightest young kids are asking the nation, as part of Cartoon Network, the kids’ entertainment channel's, ‘Redrawing India’ initiative.

Six children from across India were chosen by Cartoon Network, for the initiative launched recently, because of how differently they are leading change, one cause and innovation at a time.

From music and environment to sports and technology, these inspiring young minds are breaking down barriers, redefining dreams and are recognised nationally and globally for their bold and defining actions.

Their unique and equally diverse stories of redrawing India are showcased through a video series on Cartoon Network’s social platforms – Instagram, Facebook and YouTube – encouraging kids around India to step ahead and redraw their world.

The Redrawing India Series further solidifies the ethos of the ‘Redraw Your World’ anthem launched earlier in May, that celebrates the individuality and diversity of kids through music.

Abhishek Dutta, South Asia Network Head, Cartoon Network and POGO, said, “Redrawing India is a catalyst that will show every child that they too have the power to redraw their world. India is brimming with talent, and kids are its future. We hope that this video series will ignite passion in India’s young minds to identify and nurture their unique abilities and dreams.”

The kids making a difference are:

Prasiddhi Singh – Founding the Prasiddhi Forest Foundation at the age of 6 to help increase the earth’s green cover, Prasiddhi is now 9 years old and the winner of Pradhan Mantri Bal Shakti Puraskar 2021. The greenheart from Tamil Nadu is also halfway through on her mission of planting 1 lakh trees in India by 2022.

Hemesh Chadalavada – Winner of the Pradhan Mantri Bal Shakti Puraskar in 2021, Hemesh is a 15-year-old web developer and innovator, making waves for developing the smart and useful gadgets and apps. These include a wristband for the elderly, a smart seatbelt and accident notifier, and even a robot to help the disabled and elderly.

Ridhima Pandey – One of the youngest environmentalists in the country, Ridhima is known for her bold and outspoken fight against climate change. Listed as one of BBC's 100 Most Empowering and Influencing Women in 2020, she has been a TEDx speaker and represented India at various international forums, including as a member of the Youth Advisory Council for CoP 26.

Shrawan Sewa – A beatboxer from Pokhriabong, Darjeeling, Shrawan has conquered all odds, including a terrible accident in which he almost lost his voice. Through sheer grit and determination, Shrawan is living his dream of becoming a music artist.

Janvi Jindal – A national champion in freestyle roller skating, 14-year-old Janvi is famous for her Bhangra on wheels routine. In 2020, the young skater was recognised by the India Book of Records as the 'Youngest to perform bhangra on skates' and for gliding downstairs while skating.

Brishant Rai – A brilliant 13-year-old footballer from Darjeeling, Brishant began playing when he was only 4 years old by simply watching football matches and observing popular players on television. He is now the captain of his school team and an inspiration for everyone in his village.

Cartoon Network, through its social platforms, is inviting parents to share photos and videos of their little ones redrawing their world, in an exciting talent showcase.