As per the platform, the gamified mobile ad has reached over 8.7 million users 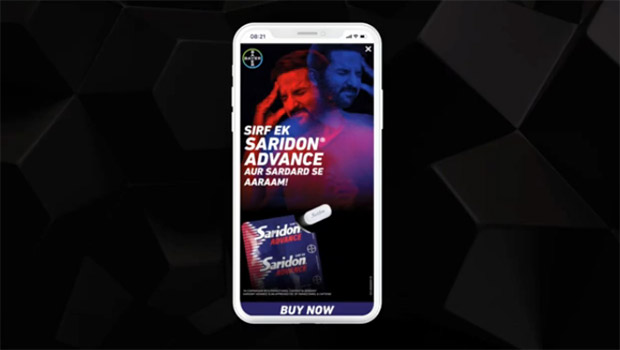 The Consumer Health Division of Bayer Consumer Health India recently launched - an extension of its legacy brand Saridon called Saridon Advance, which as per claims is 2X more effective in relieving severe headaches.

The brand partnered with MediaCom and mCanvas to promote the product with a highly engaging, gamified mobile ad that as per the platform reached over 8.7 million users.

“Our challenge was to highlight the difference between the effectiveness of Saridon Advance and other ordinary headache tablets in a creative way. The gamified concept in the mobile perfectly helped to achieve our campaign objectives,” Sandeep Verma, Country Head – Bayer Consumer Health India, said.

The ad is contextually targeted; it seamlessly appears as users read through pharma, lifestyle, and news content with a semi-transparent overlay.

The campaign first prompts users to drag an ordinary headache tablet left and right on the screen to destroy negative news that often causes a headache. However, the effects of the tablet are not as powerful. In contrast, users are then challenged to drag the Saridon Advance tablet to destroy the negative news within 15 seconds.

The animations in the ad portray that the effects of the tablet are 2X stronger. The closing screen features the CTA ‘Buy Now’, that directs them to the Pharmeasy landing page to make a purchase.

As per the platform, the ad is witnessing a 2.8% engagement rate, which is 14X higher than the 0.20% industry average for mobile banner ads. It also claimed that users are spending over 7 seconds on average, engaging with the ad.

Vishal Shah, Managing Partner, MediaCom, said, “The fact that the ad was contextually targeted enabled us to create a highly relevant experience that resonated with users. We are thrilled with the results of the campaign.”

Shilpa Sadana, Regional Head – Ad Sales (West), mCanvas, added, “Of late, there is plenty of negative news updates, which causes stress and headaches. For Bayer’s Saridon Advance campaign, we wanted to put the current news events into perspective with a contextually targeted experience.”