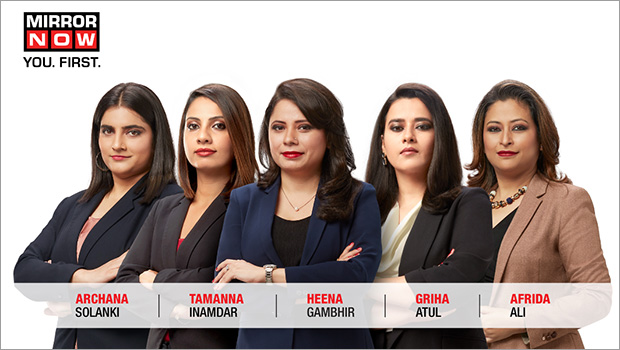 The channel has been working on the new visual identity and content formats for the past six months. The news channel said, “In its new avatar, Mirror Now offers viewers an augmented news viewing experience. Infused with vibrancy and freshness, the channel overhauls its on-air look with a relatable and upgraded colour palette and modernised typography that goes with the dynamism of the content.”

Mirror Now has introduced a new colour ‘teal’ to its visual design to reflect its young and contemporary approach, besides retaining the colours, black, white and red denoting importance, urgency and current news. The design presents an agile, positive and adaptable outlook to the channel with minimal distractions, enabling viewers to effortlessly focus their attention.

The channel’s new programming line-up has five primetime shows, including Mirror Metro at 6 pm which offers a national perspective to top news from metro cities; The Big Focus at 7 pm which brings to focus the bigger picture by presenting a well-researched context and comprehensive perspective to top stories of the day; The Urban Debate at 8 pm, Mirror Now’s flagship show that demands accountability from powers that can drive improvement for citizens; The Nation Tonight at 9 pm, a one-hour show that declutters the daily news to present top stories of the day, with insights from experts and Beyond The Headline at 10 pm, presented in an explainer format showcases an in-depth analysis of the big stories of each day.

Tune in to the people's champion news channel, raising issues that matter to YOU. Find an entirely new, revamped show line-up, and let us know what you think of it in the comments below#MirrorNow #news pic.twitter.com/grFNf0SZA9

Nikunj Garg, Editor, Mirror Now, said, “Since inception, Mirror Now has defined the norms and re-written the rules for viewer-centric journalism by covering issues that eventually proved critical for materialising positive impact. With its new visual identity and content line-up, the channel challenges the status quo and pushes authorities and powers that be for ensuring a better life that every hard-working, tax-paying Urban Indian deserves. Going behind the news and bringing truth to the fore in an era where competing for agenda-driven narratives are being peddled in the public domain, Mirror in the coming days will be the destination of the thinking Indian.”