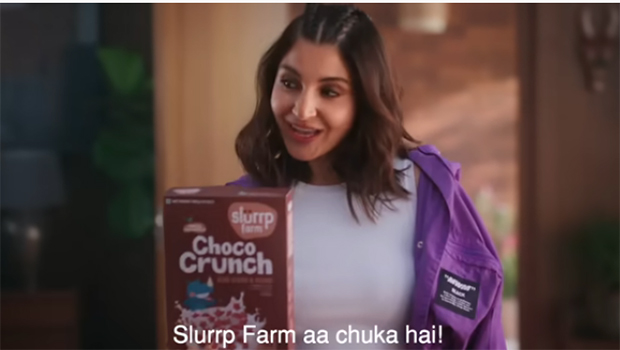 The three-part digital campaign highlights how mothers are constantly fighting a battle with the world to feed their children right. Mothers deal with a flood of opinions and options on giving their children the right kind of nutrition. Yet, they are compelled to constantly say no – to their kids, to their families, to their community, and to harmful ingredients in processed foods. This is so that their children can have an early start to eating healthy.

These constant moments of saying no often take the joy out of feeding children - one of the most nurturing parts of a mother-child relationship.

Each of the films focuses on such a moment in a mother’s life when she is urged to feed her children a seemingly healthy food option that she knows is actually packed with harmful ingredients. The films highlight her struggle to keep saying no to these well-wishers of her children only to finally find an ally - in her own kids, in Slurrp Farm and in Anushka Sharma.

The campaign features the actress in a funky, rapper avatar that brings alive the brand’s core proposition – products made with the goodness of supergrains like ragi and jowar, with no maida, refined sugar or preservatives and which are not fried. Sharma uses a catchy rap to reiterate “No bolne ka time ab jaa chuka hai, coz Slurrp Farm aa chuka hai.”

Sharma said, “It’s never easy to say no - more so when it’s to people who have your best interests at heart. Slurrp Farm’s ‘Yes Ka Time Aa Gaya’ campaign brings this predicament to life and offers a wholesome, and convenient solution. As a mother, I identify strongly with this message and I am so thrilled to take it to homes across India in this fun manner. I am confident that the campaign will inspire not just mothers, but families, to dig a little deeper and pay attention to the food their kids are eating. I hope audiences enjoy the campaign just as much as I enjoyed rapping for it, and take away the core message – that No bolne ka time ab jaa chuka hai!”

Meghana Narayan and Shauravi Malik, co-founders and co-CEOs of Wholsum Foods, said, “Ask any mom anywhere, and she will tell you that feeding her kids right is a battle she has to constantly fight with the world. Mothers have to keep saying ‘No’ to fend off junk-laden food that well-meaning family and friends often offer their kids. To showcase this constant dilemma that mothers face, we are excited to launch the ‘Yes Ka Time Aa Gaya’ campaign. It uses rap as a unique visual device to break through the clutter and highlight Slurrp Farm’s core proposition – food so tasty and healthy that no mother needs to feel guilty while indulging her children. #YesKaTimeAaGaya’ is our way of telling mothers that they will always have an ally in Slurrp Farm – just like them, we’re committed to making eating healthy and joyful for their kids. Slurrp Farm’s food is made with zero-junk ingredients and a whole lot of love by two mothers so that all mothers across the world can say yes to their children every single time.”

The digital campaign kicked off with an intriguing pre-buzz that saw the actor ask her social media followers how many times in a day they end up saying no as parents - whether it is for screen time, meal options or for chemicals in toys.

Her Instagram Story saw tremendous engagement with celebrities such as Sonam Kapoor, Nataša Stanković Pandya, Karisma Kapoor and Anita Hassanandani join in and share their experiences. Sonam Kapoor said she will probably be a YES mom while Karisma Kapoor spoke of how her NO count for the day has been increasing since forever.

The first film as part of the ‘Yes Ka Time Aa Gaya’ campaign launches today and will be amplified across multiple digital touchpoints including YouTube, Instagram, Facebook, as well as via 2,500 leading influencers, amongst others.