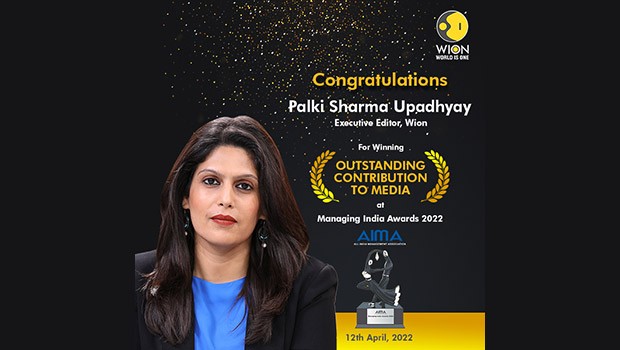 Palki Sharma Upadhyay, Executive Editor of Wion News, has won the award by AIMA Managing India Awards for her outstanding contribution to media.

The AIMA (All India Management Association) Managing India Awards were constituted in 2010 to promote management in every sphere of life and be recognised as a patron of management - in fields as varied as commerce, art, and cinema.

The 12th edition of the AIMA Managing India Awards was organised physically and was held on April 12. The awards ceremony was held in Delhi and was graced by Nitin Gadkari, Minister of Road Transport and Highways of India.

Upadhyay has been at the forefront in covering news from all over the world, Zee said. Her reportage on the ongoing conflict between Russia-Ukraine has been lauded not just by viewers across the globe, but also by world leaders such as Ukrainian Ambassador to India Igor Polikha.

Her reportage on the Russia-Ukraine conflict garnered over 25 million views on the channel’s YouTube handle.

Upadhyay said, “It is a great honour to be recognised for the work we do. At Wion news, we don’t indulge in the high-octave, biased news reportage that most other channels seem to follow. This award is a testament to the ethics and standards we hold ourselves to at Wion news. I am grateful for the recognition and hope to continue building Wion news to greater heights,”

The YouTube channel of WION News has received over 352 million views, surpassing several international media channels. The channel is also ahead of many Indian English news channels.