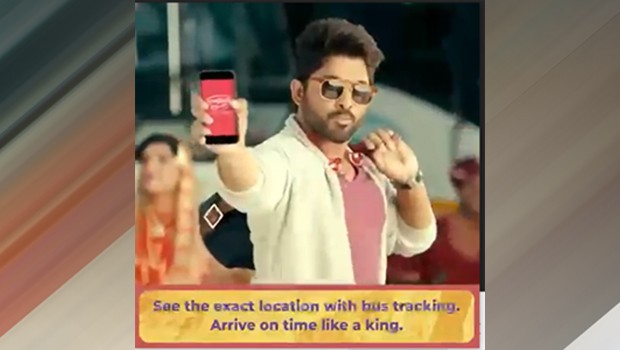 Arjun will spearhead all major campaigns for redBus, while being the face of the brand, enabling the online bus ticketing major to connect with millions of his fans spread across the country today and is slated to appear in promotional campaigns for the brand in the days ahead.

Arjun’s association with redBus goes back to 2017 when he was also appointed as the brand ambassador for 2 years.

redBus is at the forefront of the industry’s return to normalcy after the pandemic and is bringing in Arjun to draw the attention of travellers to the brand and the sector as a whole, riding on his popularity as a sensation among the masses. His strong appeal, not just in the south, but across the country, will enable redBus to penetrate further into hinterland, marking its presence felt in every state and region.

Arjun joins redBus as its brand ambassador at a time that is crucial for the travel and tourism sector, the summer. After a two-year hiatus from serious and leisure travel, the nation’s impulse towards travel is currently at its peak, making it all the more pertinent for redBus to have Allu Arjun at the vanguard of communications.

redBus will soon be rolling out a full-fledged 360-degree integrated marketing campaign across TV, cinema, digital, social media, OOH platforms and redBus app, with Allu Arjun, that pivots on the narrative of “Travel Like a King”. The campaign will highlight the advantages of booking bus seats on redBus as opposed to offline or traditional booking systems that offer little control over choice of bus, seat or ticket pricing, further emphasising that the ones who travel by redBus are the “Asli Rajas” or “Real Kings”.

Arjun, said, “I’m delighted to be engaging with redBus yet again, especially because it is a brand that engages with millions, connecting people to their destinations, with each journey being a story in itself, loaded with emotions and joys and as such, plays an important role in people’s lives. As an artist, I like to reach every place, win hearts and stir emotions and that is where I see synergies between the two of us. I look forward to the release of the first commercial soon.”

Prakash Sangam, CEO, redBus, said, “Our earlier association with Allu Arjun worked wonders for us. Since then, Allu Arjun’s appeal has increased massively across the nation and so has the popularity of the redBus brand. We therefore perceive a perfect match in each other’s brand image and believe he complements our efforts in reaching every town and village of the country. On behalf of the team at redBus, I’d like to welcome him aboard the redBus bandwagon.”

Pallavi Chopra, Sr Vice-President, Brand and Head of Marketing, redBus, said, “Allu Arjun’s return to redBus as its brand ambassador, heralds a new phase in the brand’s journey post the pandemic, helping us engage with an even larger audience as the nation looks forward to travel this summer. Our narrative of 'travel like a king', is symbolic of our unique and distinguished proposition of offering the ultimate booking and traveling experience and the new campaign is designed to get this message across to our audience across channels.”

Dileep Ashoka, General Manager and EVP South, McCann WorldGroup, said, “Travel is back with a bang and so is our real king, Allu Arjun. He represents the smart savvy traveller who has embraced the redBus app to not only book bus seats online but also get the maximum out of their bus journey.  No wonder we tagged our new summer campaign ‘Travel like a king’ just like how Allu Arjun does using the redBus app.”