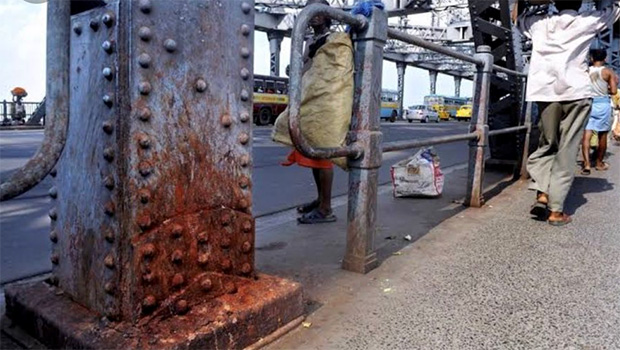 Amid heightened controversy around A-list celebrities endorsing tobacco brands, an IAS officer has shared a pic of a stained Howrah bridge and urged celebrities for the reason and motive behind endorsing such products.

Awanish Saran, an IAS Officer, took to Twitter to share pictures of one of the pillars of the iconic Howrah bridge in Kolkata.

"Kolkata Port Trust has said saliva laced with gutka is corroding the iconic 70-year-old Howrah bridge. The Howrah Bridge is under attack from gutkha-chewers," his tweet read, in which he cited Google as the source of this news and also went ahead and tagged Akshay Kumar, Shahrukh Khan and Ajay Devgn in it.

Kumar, who recently starred with Ajay Devgn and Shah Rukh Khan in an ad for Vimal, had issued a public apology. The actor said he is withdrawing his association with the brand and would also be mindful of his associations in the future, he had, however, said that the telecast of the ad would continue till the duration of the contract citing legal reasons.

On the other hand, Devgn, in a public statement, had said that he has not done anything wrong by promoting 'elaichi'. He had added that if the said product is so bad, it must not be sold in the first place.

It must be noted that most of these ads fall under the 'surrogate' advertising category. This is when a brand is forced to advertise another product as the original product may be banned from being advertised on TV and other mediums. For example, many alcohol brands advertise mineral water, music CDs with the same brand name.

Similarly, brands that sell tobacoo-based products advertise under the garb of selling 'elaichi' or mouth fresheners.

People have time and again raised questions about established celebrities endorsing a product that may cause harm to consumer's health.