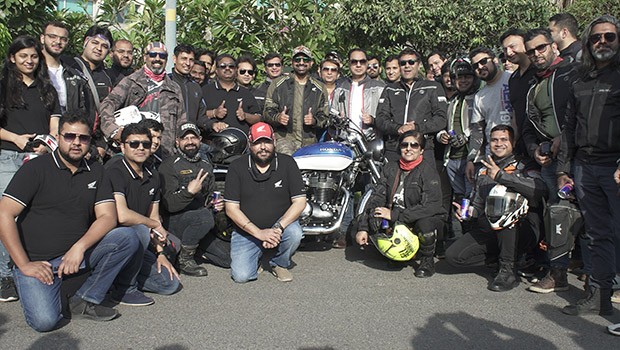 Marking the 75th year of independence while celebrating the courage & sacrifice of the armed forces,

Gracing the occasion were members of the armed forces astride their H’ness CB350, further elevating everyone’s spirits with their life story & anecdotes.

Noteworthy, the ride culminated with a felicitation ceremony to honour the special invitees including war-veterans and martyrs’ families.

Yadvinder Singh Guleria, Director – Sales and Marketing, Honda Motorcycle & Scooter India, said, “The H’ness CB350 ‘Ride for Pride’ celebrates the courage and sacrifice of the armed forces and salutes the families of these brave hearts. Their unbridled devotion for national defence is a symbolic roar for millions of Indians to feel inspired and lead a life of courage and integrity. It is a matter of pride for us as we celebrate H’ness CB350 first anniversary milestone with members from the armed forces joining us in this ride. Revving up the excitement, ‘Ride for Pride’ is a token of respect and honour from team Honda 2Wheelers India to the Armed forces.”

Further, H’ness CB350 anniversary edition was launched as the motorcycle completed successful first year of its launch. The golden themed emblems incorporated on the tank and side panel, brown coloured dual seat and chrome side-stand accentuate the motorcycle’s golden heritage.