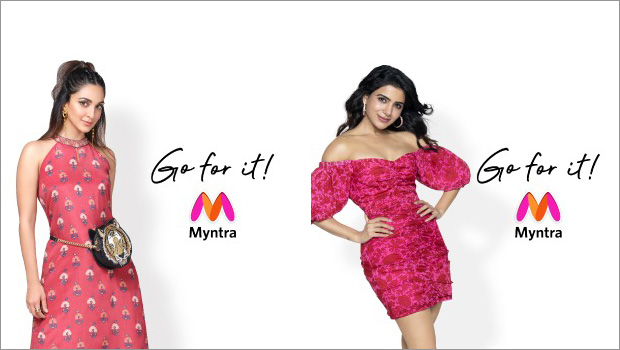 Myntra has announced the launch of its latest brand campaign featuring actors Kiara Advani and Samantha Ruth Prabhu, in two ad-films titled ‘Go for It’ that encourage shoppers to embrace trendy, fresh and offbeat fashion choices and trust the magic of taking a leap of faith.

The stars who are idolised for their uber chic fashion sense and in vogue ensembles are all set to drive home the campaign’s message of overcoming self-doubt and truly owning your narrative.

The campaign addresses the mindset of self-doubt that exists among the Gen Z and millennials’ and urges shoppers to be confident, brave and experimentative in their fashion choices in order to stand out and authentically be themselves.

Myntra encourages consumers to overcome these emotions of uncertainty and hesitance, by driving the key message of ‘If you never try, you’ll never know’ and hence ‘Go for it’ to empower them to make confident, fresh and trendy fashion choices.

Advani’s wardrobe choices and endearing presence on social media platforms have positioned her as a fashion icon among the youth, loved by audiences spanning ages. Prabhu's continued success on the big screen and OTT platforms along with her relatable sense of style have held her in good stead as a favourite across the country.

Being trendsetters in fashion, both Advani and Prabhu have audaciously adopted distinct fashion choices, to be their true authentic selves. This is what continues to make them the perfect choice for Myntra to collaborate with for their campaigns.

About the brand campaign and ad-films:

The campaign hinges on the relatable storyline that most people, including even the most confident ones have inhibitions about embracing upcoming trends or trying something outside of their go-to choice of outfit styles.

In its new campaign, Myntra is urging millions of patrons to "Go for it", and take the leap of faith to embrace new and emerging trends by letting go of preconceived doubts and scepticism that comes with accepting change.

The theme of the campaign ‘If you never try, you’ll never know’, which urges and encourages shoppers to be confident, audacious and dynamic in their fashion choices as an extended expression of themselves. The campaign also explains how Myntra brings both the freshest styles on-trend in India and signature styles from leading international and domestic brands onto a single platform.

The cast in the 20 second ad-films show everyday people including the actors overcoming the doubt that deters them from making a non-mainstream fashion choice with unconventional trendy ensembles that make them look good and feel great.

With a background score sung by Anubha Kaul, a contemporary vocalist, song-writer and composer, the brand campaign motivates you to go ahead, ditch the doubts in your head and be the best version of yourself. The actors have increased the threshold of what to expect from Myntra, which includes signature styles from leading international and domestic brands.

Advani said, "I think the tagline 'Go for it' strongly relates to the topic of self-confidence that a lot of people shy away from when it comes to their fashion choices. Myntra's all-inclusive attitude and solving for these inhibiting emotions is something that I admire most about the brand and this association. I hope being involved in this wonderful campaign helps inspire people to fully be themselves and feel confident in their own skin".

Prabhu stated, "When it comes to experimenting with fashion, I resonate on a personal level with the motto of 'If you never try, you'll never know'. My wardrobe choices and penchant for fashion aligns with those that Myntra offers and curates. The efforts that Myntra takes to assist people to find their preferred styles is what I love about the brand."

Achint Setia, Head - Marketing & Social Commerce, Myntra, said, "Our new brand campaign ‘Go for It’ is a reflection of the journey of arriving at trendy and distinct fashion choices of our Gen Z and millennial consumers. Kiara and Samantha are making a point to millions of trend-first customers that fashion goes far beyond just your attire. It is intrinsically about the person and the confidence one embodies. We all experience a multitude of emotions, while longing for trying something new. The joyful experience of overcoming self-doubt and tenaciously owning our choices is the key message we are driving through this campaign. 'If you never try, you’ll never know' is a simple and straightforward response to that emotional journey."

Myntra has launched the campaign on TV and other digital mediums, the targeted cohorts for the campaign are fashion-conscious Gen-Z and millennials.