Starting March 26, 2022, the show that supports independent artist and their work will go on-air on Red FM and social media handles of T-Series 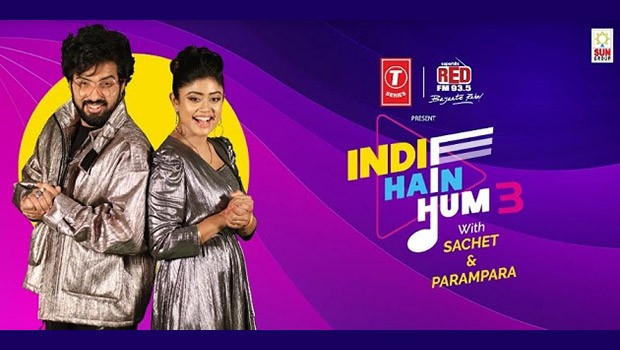 With the previous season gaining appreciation and success, T-Series and Red FM are all set for its third season where they are guaranteeing audiences triple dose of fun, triple music and triple entertainment in the musical chat show that will be hosted by adorable music duo, Sachet Parampara.

The couple now turns a host as well as RJs for Indie Hai Hum Season 3.

Bhushan Kumar, Managing Director and Chairman, T-Series, said, "Indie Hai Hum Season 2 saw an immense success which translated into collaboration for yet another season! We are enthralled to collaborate with Red FM once again with this brand-new season of the show. It's a great platform that not only supports independent music but also engages audiences through their music, journey and challenges."

Nisha Narayanan, Director and COO, Red FM and Magic FM, said, “Our journey with Indie music has been unstoppable. We have tried to build a platform that supports and cheers fresh, experimental, unique voices and sounds from across the country. The growth of hip-hop and Indie music in India in the last decade has been a very positive one. Taking this ahead, we are extremely excited to announce ‘Indie Hain Hum Season 3’ in association with T-Series. The show this year will be hosted by the dynamic musical duo, Sachet and Parampara. They not only will be hosting the show but giving it an entertaining spin along with some fresh talent from the indie music space.”