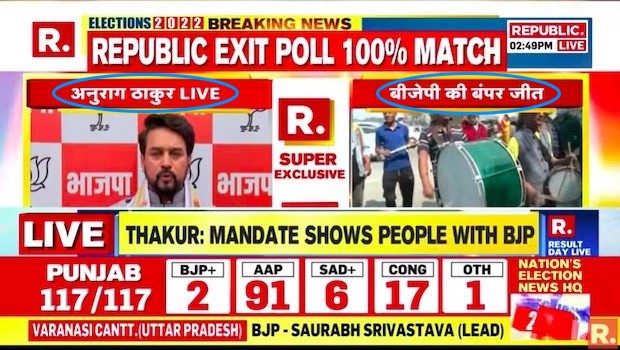 Arnab Goswami, who has been accused of manipulating ratings in the past, has again resorted to anti-trade practices to rig the ratings.

On an event as big as the counting day for elections across five states including Uttar Pradesh, English news channel Republic TV was carrying Hindi feed in order to artificially increase the ratings. The ratings for the news channels are scheduled to make a comeback on March 17.

Big events hold huge significance when it comes to driving viewership for the entire week.

“Carrying Hindi feed on English news channels throughout the crucial counting hours is a clear attempt to rig ratings. In the process, Republic would have compromised the ratings of its Hindi channel, where the stakes were low. But BARC India must take this in cognisance and treat the spike as outliers,” said an industry expert.

Another industry observer said, “On a regular day, many networks run big interviews for an hour or CSR campaigns across the network which is not considered as illegal but this is a perfect example of blatant rigging of TRPs and all other channels in the English genre will take a beating due to this act of Republic.”

“Due to the lack of confidence on Hindi channel or quality of audience reasons, some advertisers would have put money on Republic for English broadcast now I am seeing a Hindi feed which is not right for certain brands,” said an executive from a leading media agency on the condition of anonymity.