The campaign will be launched on the International Women’s Day, March 8, and will bring together the society’s key social stakeholders to encourage women to drive change and call action against harassment 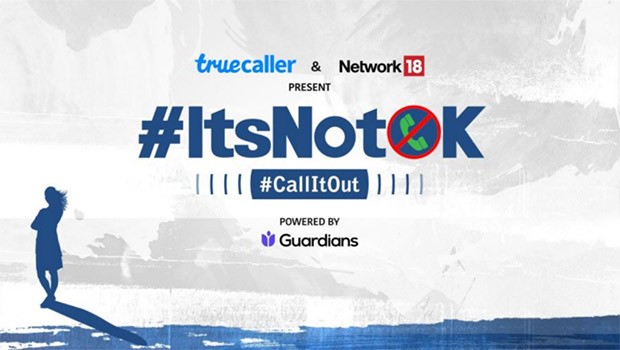 Network18 has partnered with Truecaller to launch #ItsNotOk campaign to raise awareness about why it’s important for women to ‘Call It Out’ on harassment issues, leading conversations on how the society can enable safer digital environment for them.

The campaign #ItsNotOK will be launched on the International Women’s Day, March 8, 2022 and will bring together the society’s key social stakeholders to encourage women to drive change and call action against harassment.

A survey conducted by Truecaller suggests that one in every three women receives sexually inappropriate calls or messages and 8 out of 10 women receive harassment and nuisance calls in India. While most women block these callers or phone numbers on Truecaller, very few report their harassers to authorities and the rest suffer in silence.

The campaign, #ItsNotOk believes that policy makers, social support systems, and media platforms have a collective responsibility to stop women harassment in our country. The key focus of the campaign will be on what women can do at an individual capacity and what our society can do collectively to curtail harassment of women.

The initiative will be bringing together all stakeholders including State Police, NGOs, Counselors, Legal help and Government representatives to talk about how, we as a society, can work together for a safer environment, where women feel empowered.

The campaign will see Munjpara Mahendrabhai Kalubhai, Minister of State for Women and Child Development deliver the keynote session. On the other hand, National Commission for Women (NCW) Chairperson, Rekha Sharma, and Truecaller Co-founder, Nami Zarringhalam, will be part of the Network18’s streamathon on Facebook and Twitter, where they will share their views on how can women stop harassment.

The campaign will also see engagement from multiple influencers from various fields, including the likes of Jwala Gutta, PV Sindhu, Aditi Rao Hydari and Neeti Palta. While Jwala Gutta will be part of streamathon, tweetathon and Twitter spaces activity on March 8. PV Sindhu and Aditi Rao Hydari will also be a part of a Insta live session, while Neeti Palta will be part of tweetathon and engaging on Twitter Spaces.

Smriti Mehra, CEO, Business News Cluster, Network18 said, “Through this campaign Network18 and Truecaller aim to push for providing a safer digital environment for women. We believe that it is crucial for policy makers, social support systems and media platforms to increase awareness around all aspects of women safety.”

Rishit Jhunjhunwala, Chief Product Officer and Managing Director at Truecaller India, said, "This International Women's Day, we want to reiterate that the safety of women is critical and we all need to come together to put an end to harassment in digital communication. Every woman has the power to achieve a lot more when empowered to #callitout. The campaign #ItsNotOk was launched in 2017 with the aim to support women and ensure a safe environment. This year, with support of Network 18, we are taking a new path and urging women to come forward to #callItOut and take action against unwanted communication.”

On March 8, the campaign will begin with a Streamathon, with Women's Day special, on social media platforms of Network18 including Facebook and Twitter.

The campaign will see discussions, suggestions and an interaction between the influencers and panellists on Instagram Live.

Between 5-6 pm a Tweetathon will be organised, highlighting targeted harassment that women face in the online space as well as in the real world. Network18 handles will initiate conversations on Twitter and tag guests. While responding, guests will be asked to tag inspirational women who in their eyes have taken a stand against harassment and said #ItsNotOk.

A 30-minute Twitter Space will be organised with Network18’s team of national and regional anchors moderating an interactive discussion each with panellists from varied fields.