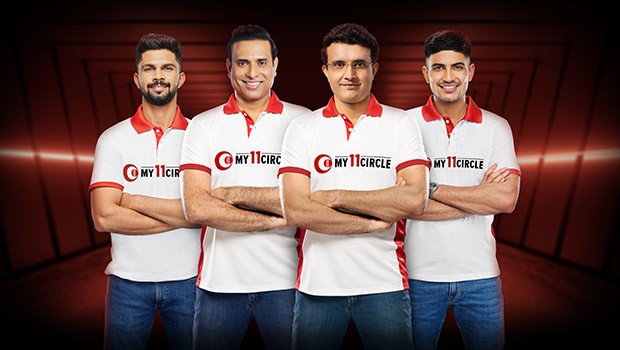 The 14-film ad campaign is designed and created by The Script Room.

The campaign titled “India ka Sabse Bada 1st Prize” creates witty scenarios to demonstrate how every prize will look smaller in front of the humongous reward offered on My11Circle platform. The cricketing stars will be literally seen in larger-than-life avatars. The campaign will go live on Start Sports and Hotstar, along with digital roll outs on Instagram, YouTube and Facebook.

Saroj Panigrahi, Vice-President, My11Circle, said, “My11Circle has emerged to be one of the top fantasy sports platforms in India witnessing 100 percent growth in user base last year. This is a testimony of our commitment to provide intuitive and personalised gaming experience to the players and rewarding their skill and passion for the game.”

He added, “As we are nearing the IPL’22 edition, we are very excited to launch our new ad campaign featuring a mix of legendary and young cricketing talent. Through such initiatives, we hope to boost our engagement with cricket fans in India and harness the potential of fantasy sports in the country.”

Ayyappan Raj, Co-Founder, The Script Room, said, “It has been a great experience working with the My11Circle team again, and co-creating an interesting campaign for the IPL.”

“We came up with the thought ‘My11Circle is offering the Biggest prize, now everything else will look Small’. And we wrote a bunch of interesting scripts - keeping in mind the duration of the films, the celebrity time and executional constraints. With fantastic direction and international quality VFX, Achowe and the team at Chalk & Cheese made the idea come alive brilliantly. We’re very happy with the way the campaign has come about, and we are positive that it will be well received.”

Games24x7, offers fantasy games like cricket, hockey, football, kabaddi and others which are just a tap away.