In the commercial, Aaryan can be seen enjoying Fanta Apple Delite, which marks the beginning of his association with the brand 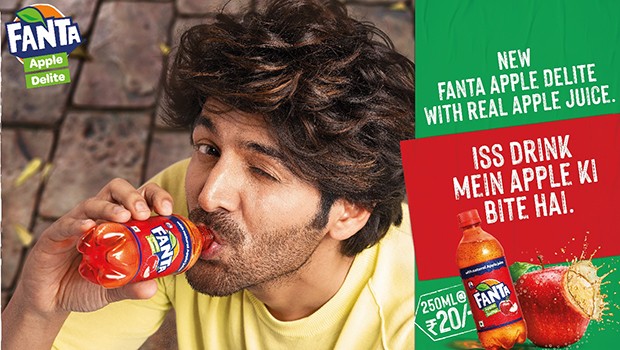 The commercial aims to foster excitement and energy for the another fun version of Fanta.

In the commercial, Aaryan can be seen enjoying Fanta Apple Delite, which marks the beginning of his association with the brand. This new campaign with Apple Delite aims to act as a nudge to stay colourful despite the conformities of their modern lives.

Tish Condeno, Sr Director - Sparkling Flavors, Coca-Cola India and South West Asia, said, “In line with our vision of ‘Beverages for life’ and staying focused to the evolving taste and preferences of our consumers today, we decided to foray into the Apple flavour segment. Furthermore, our innovation priorities and extensive research led us to bring in a refreshing twist to sparkling apple with new Fanta Apple Delite.”

She added, “Kartik brings his own zest and energy to the brand in a delightful way. The bright, summer scenes from our latest commercial, remind our consumers to stay at their playful best, despite the challenging scenarios.”

Aaryan said, “Fanta has been a household name for decades. I have grown up drinking Fanta, especially while chilling with my friends and enjoying my favourite snacks. I am thrilled to entertain audiences, through Fanta’s new launch, Fanta Apple Delite, which has a refreshing pull of Apple. Through this launch, I wish to convey to my audience to not take life so seriously and enjoy moments with family and friends. Just sip the new Fanta Apple Delite and stay happy and colourful, this summer.”

Airing from March 5 across TV channels in India, the new Fanta advertisement has been conceptualised to familiarise audiences with the new product variant. It will be complemented with a 360-degree marketing approach, which includes both digital as well as OOH efforts.

“Fanta is all about colourful people. And the new Fanta Apple Delite gives the people some more ammunition to transform everyday situations into loads of fun. It’s a drink with a twist. You don’t just sip it but you actually take a bite of it because it has real apple juice. The simple use of the sound of the apple bite not only brings alive the apple flavour but also adds some crazy to our world. Brought alive here by the fabulous and colourful Kartik Aaryan,” said Ritu Sharda, Chief Creative Officer, Ogilvy India (North).

The brand aims to further build itself in the overall fruit-flavoured segment with this variant. The new flavour will further strengthen Coca-Cola’s position in the soft beverages’ category in the country.