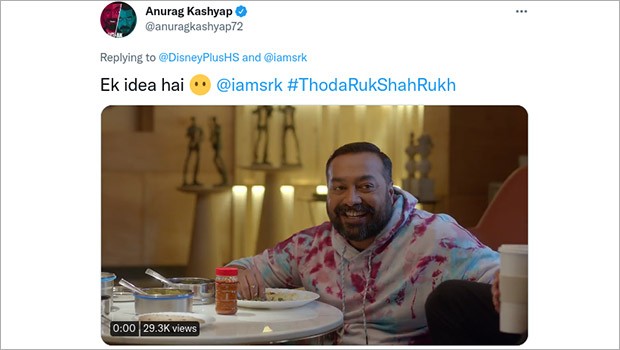 Apps across categories jumped on the #ThodaRukShahRukh bandwagon on Twitter to help the legendary Bollywood actor decide his future course of action since his plans to start the SRK+ app seem to be getting nowhere.

Disney+ Hotstar’s campaign shows Khan ideating with filmmaker Anurag Kashyap for story ideas for the proposed SRK+ app. The duo, however, seem to be running short of ideas as the ads show that almost all good storylines has already been made and is available for viewing on Disney+ Hotstar platform.

In the new video, SRK can be seen upset with Kashyap for praising other shows and not coming up with a plan for SRK's own OTT project. Shah Rukh shared the clip on Twitter and wrote, “Dil toh pagal tha, ab dimaag bhi kharaab kar diya @DisneyPlusHS walon ne.”

This was followed by Kashyap suggesting the idea of a grocery app. Dunzo jumped into the banter and said, “Khant believe we're seeing this! Kk..kk..kk..kirana toh hum deliver kar rahe hain @iamsrk, why don't you try a crypto app? #ThodaRukShahRukh”

Nykaa said Khan should scrap that idea as well, they said, “Excuse us? We are nailing it already You may have to remove that idea from your cart @iamsrk,How about a food delivery app? #ThodaRukShahRukh”

Zomato replied with a tweet that read, “umm, sorry? even if you call it Shah Rukh Khan, we'll still be the Badshah of food delivery just kidding, we love you, but #ThodaRukShahRukh PS. feeling sorry for the phone in this video, let us know if you need rice to repair it :)”

It all started with Khan taking to Twitter to announce that big news is expected from him soon in the OTT world. “Kuch kuch hone wala hai, OTT ki duniya mein,” said his post along with a photo of the actor and a caption that said ‘SRK+”. This was followed by leading actors, filmmakers and others congratulating Khan and saying that this would be a gamechanger in the OTT sector.

#ThodaRukShahRukh is a part of an ad campaign by Disney+ Hotstar featuring SRK. The film talks about how the platform has everything to satisfy the viewers’ needs, which means every type of content, and this is why the star is unable to launch his new app.